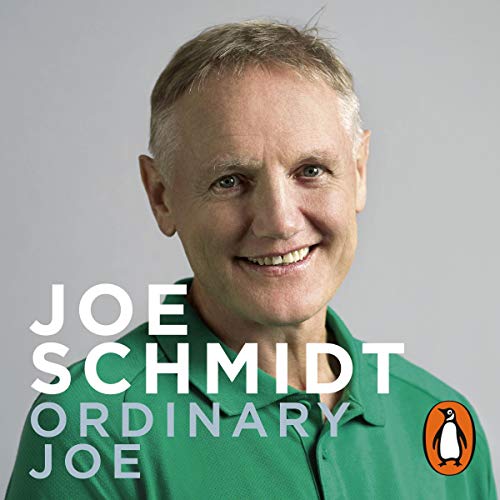 In the autumn of 2010, a little-known New Zealander called Joe Schmidt took over as head coach at Leinster. He had never been in charge of a professional team. After Leinster lost three of their first four games, a prominent Irish rugby pundit speculated that Schmidt had 'lost the dressing room'.

Nine years on, Joe Schmidt has stepped down as Ireland coach having achieved success on a scale never before seen in Irish rugby. Two Heineken Cups in three seasons with Leinster. Three Six Nations championships in six seasons with Ireland, including the Grand Slam in 2018. And a host of firsts: the first Irish victory in South Africa; the first Irish defeat of the All Blacks, and then a second; and Ireland's first number one world ranking.

Along the way, Schmidt became a byword for precision and focus in coaching, remarkable attention to detail and the highest of standards. But who is Joe Schmidt? In Ordinary Joe, Schmidt tells the story of his life and influences: the experiences and management ideas that made him the coach, and the man, that he is today. And his diaries of the 2018 Grand Slam and the 2019 Rugby World Cup provide a brilliantly intimate insight into the stresses and joys of coaching a national team in victory and defeat.

From the small towns in New Zealand's North Island where he played barefoot rugby and jostled around the dinner table with seven siblings, to the training grounds and video rooms where he consistently kept his teams a step ahead of the opposition, Ordinary Joe reveals an ordinary man who has helped his teams to achieve extraordinary things.

What listeners say about Ordinary Joe

An incredible insight into the life of the also incredible man that is Joe Schmidt and Irish Rugby.

I loved reading it so much I decided to listen to it aswell.
Narrated by Paul Haley who has an amazing New Zealand accent makes it an even better experience to listen to.

I looked forward to hearing from Joe Schmidt on his journey. I felt there was too much to try and cram into one book or at least one book with so few pages!!

Nothing controversial but still a good read / listen

Anyone looking for anything controversial or revealing will be disappointed. An honest retelling of Joes life around rugby,and a confirmation of the gentleman he is and his coaching philosophy and beliefs. A small insight into the goings on behind the scenes without giving too much away

Best at the end

The book started slowly. I thought it would be better.
Last two chapters are the best

An interesting if uneven coverage of the life and mostly rugby experience of Joe Schmidt. More coverage on the family France experience in Clermont would have been worthwhile reading too. However, the real issue with this Audible production was not content, but the production. To mispronounce French words and names might be acceptable for the New Zealander who reads this, but the Kiwi names of established rugby players is a shocker. Also the abbreviation of Rugby World Cup might be RWC but it became quickly jarring that this shorthand was read out as letters repeatedly spoiling the last section of "R. W
C." 2019...Shame really as much of the subject matter fascinating

wish Joe had narrated it