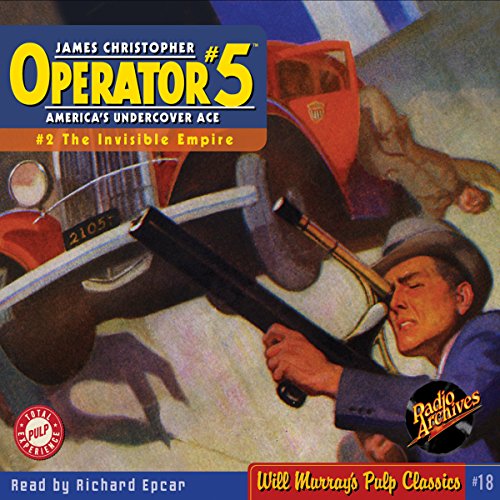 Before James Bond was ever imagined, Jimmy Christopher was the bravest, boldest, and best-equipped secret agent any nation ever had!

From out of the pages of Operator #5 magazine steps a dramatic hero who pits himself against threats to national security from all origins. Whether it's subversive internal menace, or a full-scale invasion from an enemy land, James Christopher stood ready and resolute to defeat it.

James Christopher did not technically belong to the U.S. Secret Service. He was a top agent for an America's unnamed Intelligence Service. It was in his blood. His father, John Christopher, retired from the same agency years before. Answerable only to his superior, Z-7, and carrying a letter from the President of the United States identifying him as Operator #5, Jimmy Christopher played for keeps. He carried a rapier sewn into his belt, and in a golden skull hanging from his watch-chain was a reservoir of poison to be taken in the event of capture.

Originally written by master pulpsmith Frederick C. Davis, the Operator #5 series was a clear forerunner of the spy and espionage genre, which exploded in the 1960s when President John F. Kennedy happened to remark that he enjoyed reading Ian Fleming's James Bond novels. The first Bond film, Dr. No, was released in 1962. Soon, America was surrounded by spies. The Man from U.N.C.L.E., Our Man Flint, and Nick Carter, and Killmaster were just a few of the most prolific. Jimmy Christopher was on the job a generation before them all, blazing the espionage trail, and keeping America safe from fascism and other wicked isms.

Unseen, impregnable, the strange war engine of a foreign power hovered over America, waiting the fatal moment to hurl death upon a thousand cities and towns. Foredoomed to destruction and desolation before the ravaging hordes of the Yellow Empire, bleak despair gripped the nation's millions. And then men held their breath in agonizing hope - as Operator #5, single-handed, seized the last grim chance to save the United States!

This Total Pulp Experience audiobook contains all three stories from the second issue issue of Operator #5 Magazine, May 1934.