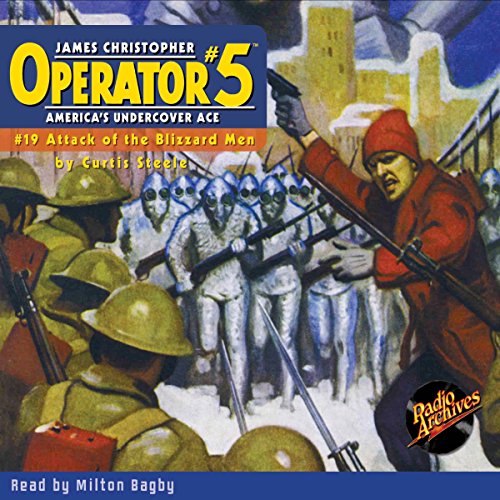 As suddenly as Death, the bitter cold came, and with it, the armored tanks, sleek submarines, and mailed warriors of the invading legions! An international syndicate, fearing America's greatness and strength in war, had unleashed savage war-dogs to win the conflict before it fairly began. The greatest military genius of modern times commanded the enemy, and Operator #5 of the United States Secret Service - known to his dearest friends as Jimmy Christopher - was America's choice to oppose him. But with the Intelligence slaughtered, with Diane in the camp of the enemy, the federal government in hiding, Operator #5 faced the stiffest battle of his career, and the Gods tossed dice to determine the victory!

Into this unprecedented crisis plunged Jimmy Christopher. Only one man, but a man who embodied the American spirit - and stands prepared to perish to protect his country.

Attack of the Blizzard Men is read with stirring intensity by Milton Bagby. Originally published in the October, 1935 issue of Operator #5 magazine.