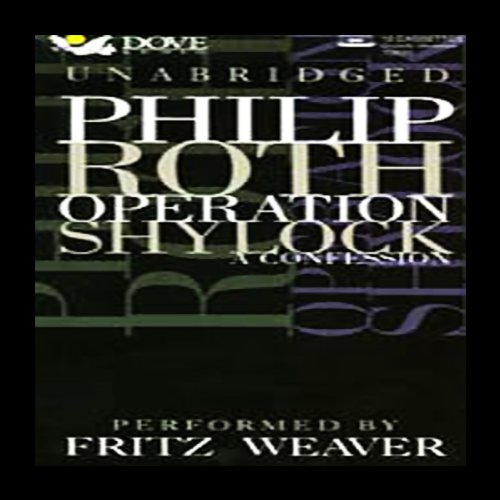 By: Philip Roth
Narrated by: Fritz Weaver
Try for $0.00

What if a look-alike stranger stole your name, usurped your biography, and went about the world pretending to be you? In Operation Shylock, master novelist Philip Roth confronts his double, an impostor whose self-appointed task is to lead the Jews back to Europe from Israel. The "fake" Philip Roth becomes a monstrous nemesis to the "real" Philip Roth, who must take a frightening and mysterious journey through the volatile Middle East. Suspenseful, hilarious, and impassioned, Operation Shylock is at once a spy story, a political thriller, and a confession, pulsing with intelligence and intense narrative energy.
©1993 Philip Roth (P)1993 Dove Audio, Inc.
Classics Literary Fiction Political Jewish
Show more Show less

"One of Roth's grand inventions.... [He is] a comic genius...a living master." (Harold Bloom, The New York Review of Books)
"The uncontested master of comic irony." ( Time)
"A brilliant novel of ideas...Roth has gone farther into his own genius than he ever has before." ( The Nation)

What listeners say about Operation Shylock

A Jew, a doppelgänger, Israel and the Diaspora

This is where the late great Roth run began. Operation Shylock started what might just be the greatest series of amazing books by one author I can think of:

So, like I tend to do with great writers, I back into their early greats. I read backwards, crosswise, and reverse into the first.

So, 2014 (21 years after it was first published), I find myself reading and loving Operation Shylock. I am amazed by Roth's ability to bend an idea back and forth without having it break. He is able to flex and bend (sinister?) an idea until every detail has been bled out. The ink of the effort is all on the page. He is able to construct a book filled with doppelgängers, liars, Jews and Palestinian rock throwers and professors and wreck havoc on any simplicity of plot. Every mirror in Roth's novel reverses the part in your hair and eventually shows you that your belief about who you are and what you believe is constructed out of fiction. There is no fact only deception and transgression.

This novel isn't built from one narrative. It is built out of several narratives. The narrative of Roth writing about a Roth (a fictionalized version of Roth) being stalked by a Roth (Moshe Pipkin). Everyone is gaming everyone. Interjected into the narrative are several true narratives (Aharon Apelfeld, Leon Klinghoffer, John Demjanjuk (who may be also be Ivan the Terrible Demjanjuk). These "true" narratives serve to also deepen the idea of a fluid identity, our mutual responsibility, our ultimate nature to lie, to deceive, to hustle. Then there is the other true narrative. The narrative of the Jew, the Goy, Israel, and the Diaspora. Roth is somehow able to weave this all together in a way that fits and works. Roth is able to reflect on his place within the Jewish community and as a writer in a way that he couldn't without being confronted with a transgressive doppelgänger. Anyway, I'm still trying to get my brain and my stomach comfortably around the whole of it. Perhaps, I'll write more tomorrow about the missing Chapter 11, or perhaps I'll just say screw it and return to my own goy problems.

I loved this book! I listened to Operation Shylock while commuting to work--I shivered at its brilliance, gasped aloud each time I reached my destination and had to turn it off. As one whose profession it is to sort through the psychological complexities of mental illness, neurosis, psychosis, shifting perceptions and altered realities, I found the minds of the twin Philip Roths (real or imagined?) as fascinating as any patient I've ever had the opportunity to accompany through the dark abyss of self-doubt, creativity, confusion, and triumph. It takes one down thrilling internal twists and turns of the American Jewish psyche, back alleys of the Israeli/Palestinian conflict, and the Nazi war trials. This is one of those rare books I will listen to again.

I made what I believe to be the "mistake" of making this my first Philip Roth experience. I don't get the impression that this is typical of his work. I found it interesting and somewhat enjoyable, but I felt throughout as though I was missing things that may have been relating to previous works (almost like "in" jokes I didn't understand). Part of this may be that I am not of Jewish heritage and thus cannot relate specifically to the whole Israeli gestalt. Nevertheless, I am not sorry for having listened to Operation Shylock. It held my attention and certainly employed many interesting techniques for telling a story. I will check in with friends and see what they think should be my next Roth listen.

Absolutely could not finish the book-- couldn't even get further than 4 hours into it. We read it for book club and every other member felt the same way although some did soldier on to the finish. This book may have had some relevance in the '80 s when it was written but for this reader in 2016 it was repetitive and boring. Does not have anything close to a story and despite the rather interesting premise it is NOT humorous a la Portnoy. So only go there if you must. There are too many other better books to be read
And oh yeah, the reader is just the worst, breathy and slurpy. Expected my ear to be wet after removing the headphones!

After listening to American Pastoral with great pleasure, I embarked upon Operation Shylock, which presents the political situation in Israel of the 1980's. Current (2004) events in Israel show a country frozen in time for decades, and contributed to my sense that this book may be Roth's attempt to voice independent perspectives on the situation in the Middle East. As such, I found it not so much a work of fiction as a political discourse. And that is why I rate it low--I expected something quite different. But in continuing to listen, I continually questioned if he was not, at the time of writing it, still suffering from drug-induced paranoia in reality.

Each perspective is one which I certainly have considered as I contemplate the morass that is the political situation there. Perhaps each character, however, is a Halcyon-derived fragment of Roth himself, torn between loyalty to and criticism of the Israeli leadership and settlers. If so, one reads the premise of his book as his alter-ego searching for the best way to preserve the lives of Israeli Jews who seem once again to be facing annihilation, partly due to their own aggressive policies.

Diasporism, as Roth envisions it, though surely not as welcomed by Europe as the faux-Roth hopes, certainly seems to be a better alternative than the "identification with the (Nazi) aggressor" they appear to be demonstrating toward the Palestinians at present. Curiously, an article in the New Yorker just this week (May 31, 2004 issue, "Among the Settlers"), asks, "Will they destroy Israel?"

Awful narration. I love this book,,,The "Zero Mostel" performance with the Jewish accents are not needed. Jewish "Blackface"

There is definitely a meandering quality to this Roth novel that undertakes a vast canvas of the Arab-Isreali issue and the 20th Century holocaust as its subject. I found the character, Jinx, near intolerable and also improbable in the context of the novel. Vast stretches where that aforementioned character is described in detail along with much dialogue was the exasperating element for me. Otherwise the novel is disturbing and affecting, quite suspenseful, and well worth reading from the author's ceative golden age in the 1990s.

One of his best.

Philip Roth is kind of God or simply very good. GAD for sure. But no personality disorder! The toying around with identity is so clever throughout his career.1

An exploration of Jewish identity

Philip Roth's double, also named Philip Roth, is traveling the world touting diasporism -- the ideology that Ashkenazic Jews should escape an inevitable holocaust in Israel and return to Europe where he is conviced they will be welcomed. As he pursues and then encounters his alter ego, Roth the writer becomes or pretends to become Roth the diasporist. As with everything Roth writes, this book is skillful, witty, and elegantly written, but I found it tiring, as each character--Jewish, Palestinian, Zionist, or Diasporist--seems to embody an idee fixe and ranted on about his obsession.

This is my second audiobook by Roth, first was American Pastoral, and found it very enjoyable--full of his dark humor--"there's no business like Shoah business" ect... and as another reviewer mentioned it has enough pyschologizing to be meditated over for weeks. I'd recommend listening to American Pastoral first but this is a good listen and Fritz Weaver has done an excellent reading!

Larry David and Vladimir Nabakov might have written this story of doppelgangers, "recovering" anti--semites and the trial of Ivan the Terrible. Deadpan narration adds to the comical absurdity running through this so called confession.

I enjoyed this book enormously. Excellent written and a great introduction to Philip Roth. Yes