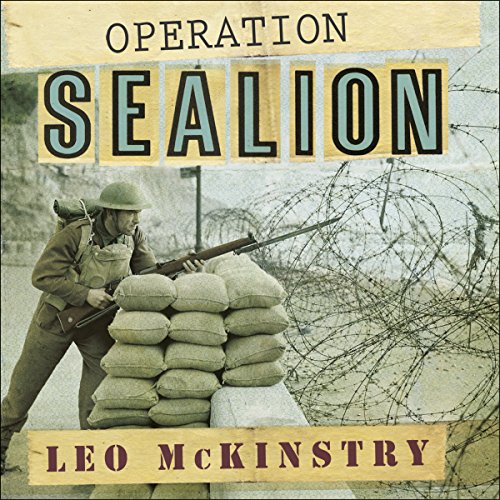 By: Leo McKinstry
Narrated by: Peter Noble
Try for $0.00

The thrilling true account of Hitler's first defeat. One of Britain's most remarkable victories of the Second World War.

In the summer of 1940, the Nazi war machine was at its zenith. France, Denmark, Norway and the Low Countries were all under occupation after a series of lightning military campaigns. Only Britain stood in the way of the complete triumph of Nazi tyranny. But for the first time in the war, Hitler did not prevail.

The traditional narrative of 1940 holds that Britain was saved from German conquest only by the pluck of RAF Fighter Command during the Battle of Britain. The image of Dad's Army recruits training with broomsticks is a classic symbol of the nation's supposed desperation in the face of the threat from Operation Sealion, as the German plan for invasion was code-named.

Yet as Leo McKinstry details, the British were far more ruthless and proficient than is usually recognised. The brilliance of the RAF was not an exception but part of a pattern of magnificent organisation. In almost every sphere of action, such as the destruction of the French naval fleet or the capture of German spies, Britain's approach reflected an uncompromising spirit of purpose and resolution. Using a wealth of primary materials from both British and German archives, Leo McKinstry provides a groundbreaking new assessment of the six fateful months in mid-1940, beginning with Winston Churchill's accession to power in May and culminating in Germany's abandonment of Operation Sealion.

What listeners say about Operation Sealion

This book is superbly written and leaves few if any stones unturned. If the Nazis had been a little better equipped and acted sooner the outcome of the war may well have been so different. The will was certainly there, it was the practicalities that got in the way. Nazi preparations for life after an invasion were chilling. I hadn't realised quite how well Britain was prepared to resist invasion, and thankfully this preparedness and resolve paid off but couldn't be taken for granted. Great book, very well researched and I found it an easy listen despite the 17 hours. Be prepared to hear much around the subject but it all feeds back to give an excellent and relevant account of events. Enjoyed listening to it as much as Spitfire. Highly recommended.

Stimulating views on much written about subject.

The non invasion of the UK in 1940 is common knowledge and frequently referenced in other works on WW2 , this book goes into refreshingly new detail which supports the position that the UK was no pushover for the Nazis. I liked the limited references to the Battle of Britain as I did not want to go over that heroic performance by the RAF again. The progression of the defence of these islands from May 1940 to the Autum of that year moves along at a good pace with the author building on his key threads as he goes along. My only critique is that the ending was not a summary or conclusion of the overall outcome so I was left hanging on a rather emotional point of the beauty of the Cornish coast. Well read with respectful use of quotes from the principle players.

I have long been been interested in this era, 1940, Churchill and the Battle of Britain especially. I thought my general knowledge of the period was pretty good. I have learnt so much more from this book. Each chapter looks in depth at a different aspect of the operation. Amazingly interesting and totally absorbing. The research that has been carried is incredible. All told in a gripping and interesting way. By far the best Audible war account I have had the pleasure of listening too.

Narrated with clarity and feeling, this book addresses the massive challenges facing Britain during 1940 with meticulously researched detail. But it is not a dry resuscitation of facts because the author has found sources at all levels in British society to describe their experiences during a year when the British pulled together in a monumental backs to the wall struggle for national survival. That is no exaggeration because had Operation Sealion succeeded all British males between the ages of 17 and 45 would have been deported as slaves, thus ensuring that population reproduction came to a complete stop. I, for one, would not be alive today.

a dam good listen , well narrated as usual by Peter Noble . I recommend

A great insight to the fear and paranoia of the times

This book is a satisfyingly complete well researched account of all things involved in the defense of Britain from a Nazi invasion in 1940 when the country was militarily very weak after being routed from Europe and abandoning the majority of arms at Dunkirk. It covers the leadership and decisions of both sides, resources, politics, tactics and espionage. It also covers the threat from appeasers, nazi sympathisers and 5 columnists. The complete picture is mind blowing. The pace and narration is very good. A must listen.

A testament to the stoic resolve of the day

Amazing what the population did in the face of adversity. The efforts of the inventors, the engineers, and the everyday people are unsurpassed and now, regrettably, largely lost to the annuls of time. I will never see Dad's Army in the same light. A fascinating, educational, and informative listen.

This is an excellent and detailed account of both the state of Britain in the summer/autumn of 1940 and the German planning and mindset for their plans to invade.

Highly recommended to anyone interested in the history of the Second World War, or curious as to how Britain managed to inflict the Nazi's first set-back.

The author is entirely justified in not concentrating mainly on German planning and widening the scope to include the British experience predominantly. This becomes obvious in his dissection of the German plans, which become increasingly conspicuous in their lack of detail and ultimately by their absence!

The challenge to the the 'close run thing' narrative is very powerful. I was most enthralled by the skillful political wranglings of WSC's government, and the manner in which FDR and the US were drawn ever closer to formal alliance.