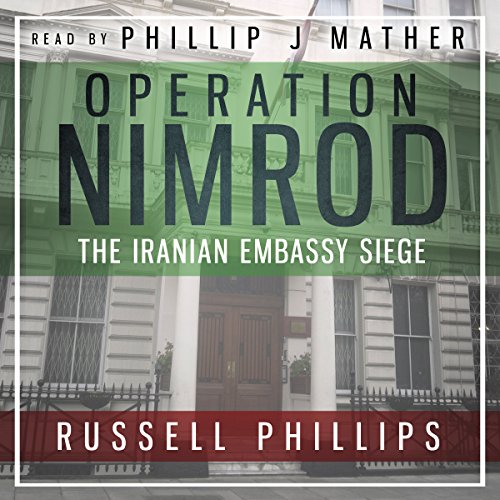 By: Russell Phillips
Narrated by: Phillip J Mather
Try for $0.00

On April 29, 1980, British police assured Iran that their embassy was secure. The very next day, terrorists stormed the embassy and took 26 hostages. With the Iranian government willing to let the hostages become martyrs, and the British government only willing to talk if the terrorists surrendered, 26 lives hung in the balance.

What followed was six days of tension and terror. It was finally ended when the SAS launched a daring rescue mission, broadcast live on television. Millions held their breath, waiting to see the outcome of Operation Nimrod.

What listeners say about Operation Nimrod

Excellent Narration of an Interesting Event!

If you could sum up Operation Nimrod in three words, what would they be?

It is. What makes is so is the excellent narration by Phillip Mather.

The narrator once again proves his skills in narration. Mr. Mather proves to be the quintessential voice for bringing history to life. I can easily picture the narrator as a favorite college professor, regaling his students with his talent to bring what could be ordinary historical tales to life in a way that both fascinates and educates.

A Riveting Performance of a Great Historical Momen

Nobody does it better than Mather (Phillip J. Mather) When it comes to historical non-fiction. His meter and tempo accentuate rather than trample on the story which is wonderfully written. BRAVO

I was gifted this book in exchange for an honest review.

When first reading the description, I was thinking that this was similar to the movie Argo. This event happened after the events in Argo and was different. My first thought when reading this book (or listening to this book) was, “Where is Jack Bauer??”. Then my next thought was, “What the hell are these terrorists thinking??? Don’t they know their demands will not be met? Are they not familiar with democratic diplomatic policy towards terrorists?” I kept on hearing Jack Bauer’s voice in my head saying, “The United States does not negotiate with terrorists” (and, of course, insert “Great Britain” or “United Kingdom” in place of “The United States”).

I mean, let’s be serious here and try to think of all the possible outcomes from the terrorists’ point of view.
1) They get their way, new country established, prisoners released, and they live (get out free).
2) They become martyrs, kill all the hostages, die for their cause, and possibly start more trouble in the world.
3) They do not get their way, soften up to the hostages, act more like humans, and ultimately lose to the British SAS.
One of those options isn’t going to happen and I don’t have to tell you which one. Didn’t they know this???

I don’t think I would have believed the story in this book if it was not a true story. It just seems so unlikely that it ended the way it did with such a high success (from the good guys side). I see that there is a documentary on YouTube that I plan to watch sometime. This would make for a great movie too (Argo 2 perhaps…? No, needs a different title for sure).

I think that this book is a better book to read as opposed to listen to. I liked the narrator and thought he did a good job but there are just too many characters to keep track of and too many terms that I would need to consult the glossary/appendix on.

Altogether, this is a good short book and an even unlikelier story. Thanks for the free book, Philip!

Narration could be better. a baritone is probably not a good choice for a narrator.

Would you listen to Operation Nimrod again? Why?

Yes, I can remember this incident like it was yesterday and was very impressed by Phillip J. Mather's narration of it.

I did not have a favourite character but the incident was so memorable because of all the separate components of the story, and of course the climax, Operation Nimrod.

What about Phillip J Mather’s performance did you like?

His voice, in my opinion is perfect for this narration.

Yes it was, this very tense situation story made compelling listening

It was the police officer that kept his pistol hidden from the kidnappers, who ended up killing the lead kidnapper before he could successfully throw a grenade into a group of hostages.

What about Phillip J Mather’s performance did you like?

His voice was awesome!

I was provided this audiobook at no charge by the author, publisher and/or narrator in exchange for an unbiased review

Anatomy of an Event

This is a very short book, but it gives a fairly in depth portrayal of what happened during these 6 days, and why it happened. The extreme drama is showcased by the low key objective writing style. The author has gathered, and presents documentation from various sources to excellent effect. He has, in fact, made that documentation an integral part of the story he is telling. This is more than another incident in the history of terrorism, because it shows the first time the British SAS became, essentially public figures, and in their success, viewed live around the world, popular heroes, as well.

Mr. Mather provided an adequate and professional narration. Though he used expression fairly well, and though his pronunciation was excellent, I was slightly put off by his narrating style for reasons I can’t quite pin down. However, that in no way distracted me from this book.

This was not so much a novelization of Operation Nimrod that took place in late April and early May 1980 in London, England just days after the failed American attempt to rescue the hostages at the American Embassy in Tehran, Iran as it was a blow by blow account of police efforts to end the hostage situation at the Iranian embassy in London and the subsequent mission by the British SAS that finally did rescue the hostages there.

The book is well researched as nearly as I can tell, and I learned much from it. There are not really any characters to speak about. Many names are mentioned during the course of the book but none of them come across as characters like you would have in a novel. I see that there are other books by this author listed. I could be tempted to listen them. As good as this book was I would like to see what Russell Philips could do with a novel of intrigue.

Phillip J. Mather did not really give a performance so much as he just read the book. I felt like I was listening to grandfather reading me a story from a history book. He also has a very deep bass voice that I find hard to listen to. Hence my low rating for his "Performance."

I received this book from the author in exchange for an honest review.

Good. If you can handle the narrator and the price.

For the price this is a costly book. It's well written and read but very short.

The narrator has a very deep voice which exposed some of the weaknesses in my cars speakers.

Overall though it was decent. Maybe if it had been cheaper it would have faired better in my feelings.

Full disclosure I received this book as free review copy from the author.

I really enjoyed this book, it was short at 4 hrs but stuck to the details of the siege without wandering off into the larger politics of the time. I learnt a lot about the event, such as the Iranians were the victims of the attack and not as I thought the instigators and post action the police investigating the SAS in the same way as if they were bank robbers.

If you have an interest in the event I recommend this book wholeheartedly.

My only criticism is the narrator who has a very British deep voice and relatively slow narration speed. When I first put it on I thought it had been put into x0.75 narration speed, but it hadn't. He is slightly off putting but you get used to it after the first hour.

I will be seeking out the authors other titles. 5*