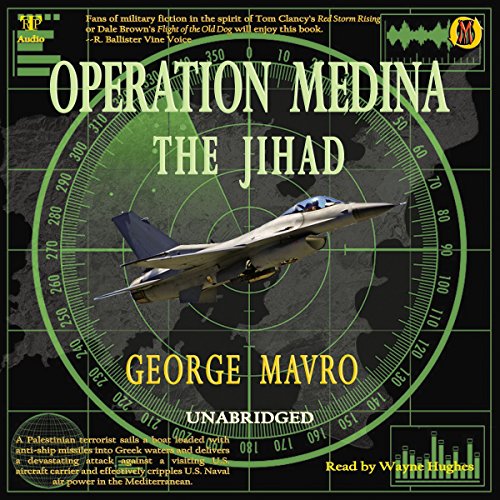 The second book of the Operation Medina series, The Crusade, opens up with the Greeks retreating on all fronts from the Turkish onslaught.

The Balkans and Mideast, a region very much in the news, is the setting for this action novel which takes place in the not too distant future. The secular pro-western government of Turkey has been overthrown in a violent revolution and replaced by an Islamic fundamentalist regime. Her fanatical leader, General Muhammad Kemal, has contrived a devious plan to restore the Ottoman Empire in the Balkans and unite the Islamic world under his evil rule. To accomplish this, Kemal will launch a devastating war with all the tools in his arsenal including Islamic Jihadist terrorists and WMDs. His first targets are US alley Greece and the few remaining American forces stationed in the region.

For his diabolic scheme to be successful, Kemal must eliminate any source of possible outside interference. To accomplish this, he sends a terrorist team to take out the USAF fighters based in Ramstein Germany.

A thousand miles to the south, a Palestinian terrorist sails a boat loaded with anti-ship missiles into Greek waters and delivers a devastating attack against a visiting US aircraft carrier and effectively cripples US Naval air power in the Mediterranean. The next morning, Turkey and her allies launch a devastating surprise attack against Greece.

With the Greeks facing certain defeat, the US President quickly dispatches to Greece, a fighter squadron and a small USAF Security force contingent for airbase ground defense. The USAF expeditionary force is under the command Lieutenant Colonel Jack Logan a veteran fighter pilot. Logan will be faced with the greatest challenge of his career; he must use every bit of his skills to keep his outnumbered command from being annihilated and help stop the enemy onslaught.