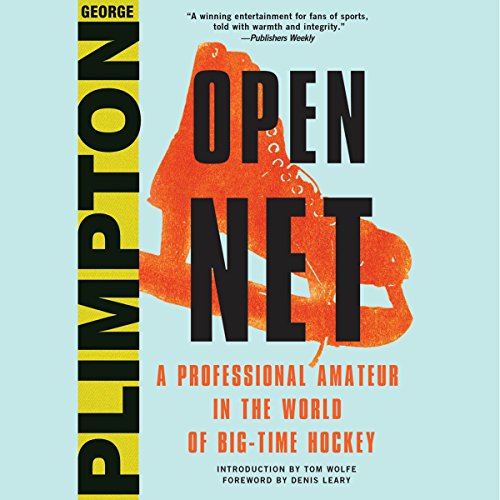 George Plimpton takes to the ice with the Boston Bruins in this memorable portrait of the rough-and-tumble world of professional hockey, recorded and now featuring a foreword by Denis Leary.

In Open Net, George Plimpton takes to the ice as goalie for his beloved Boston Bruins. After signing a release holding the Bruins blameless if he should meet with injury or death, he survives a harrowing, seemingly eternal five minutes in an exhibition game against the always-tough Philadelphia Flyers.

With reflections on such hockey greats as Wayne Gretzky, Bobby Orr, and Eddie Shore, Open Net is at once a celebration of the thrills and grace of the greatest sport on ice and a probing meditation into the hopes and fears of every man.

"A season with the Boston Bruins is the basis for Plimpton's absorbing personal report.... A winning entertainment for fans of sports, told with warmth and integrity." ( Publishers Weekly)
"[Plimpton's] sojourn with the Bruins in training camp culminated in a five-minute stint in goal against the Philadelphia Flyers.... Plimpton tries valiantly to acquire the skills of the position and comes to his moment of truth." ( Library Journal)

What listeners say about Open Net