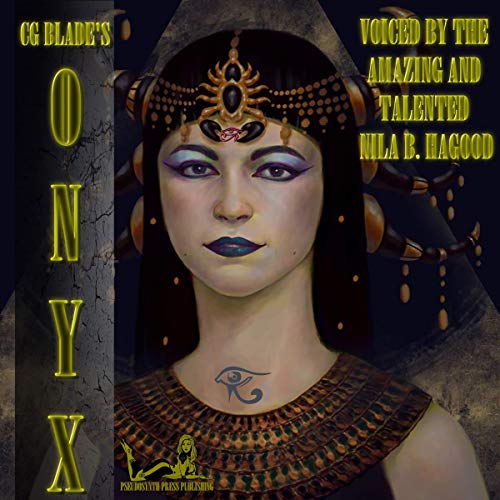 In this fourth thriller in the Pseudoverse Series novels, we take you into an ancient time and new direction. Caught between the past and the present, a young archaeologist is thrust forward into the future as a pawn in a twisted game hosted by the corrupt, the greedy, and the underworld.

In this fourth novel in our Pseudoverse, the year is 2049, 27 years before Cobalt. Who was the very first Pseudosynth? A detective working a case of murders become a casualty of Ray Nelson’s early work as we follow her and her partner through the wasteland of lies, cover-ups, and mummified remains. This thrilling and mysterious follow-up to Emerald will have you on the edge of your seat as we unveil who was "the first genetically engineered conscious being" in this tale of Egyptian lore turned painfully bloody, and cubed.

Look to the darkened skies above as the moon moves closer to the sun. In an ever-growing eclipse, the Goddess Serket, the Scorpion Queen, is born for the first time. Onyx is one "hell" of a ride that ends with a shocking conclusion leading to the fifth novel in the series, Heliotrope.

Once it awakens, you had better run like hell! May she have mercy on your tainted soul...Onyx is homage to the best of all Mummy movies and books, and is dedicated to Egyptian director Alex Proyas for his inspirational videos and groundbreaking movies.

What listeners say about Onyx: An Eclectic Book

I was given this free review copy audiobook at my request and have voluntarily left this review. This was a very interesting addition to the series and I was not expecting it. I was very pleased with it. I honestly think this is my favorite of the series so far. You have to read this one!