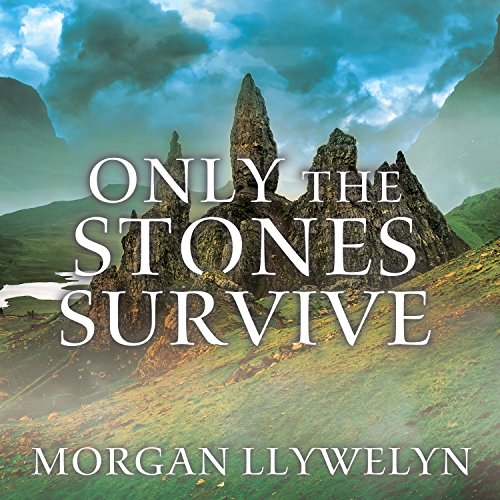 Only the Stones Survive

By: Morgan Llywelyn
Narrated by: Michael Healy
Try for $0.00

For centuries the Túatha Dé Danann lived in peace on an island where time flowed more slowly and the seasons were gentle - until that peace was shattered by the arrival of invaders. The Gaels, the Children of Milesios, came looking for easy riches and conquest, following the story of an island to the west where their every desire could be granted. They had not anticipated that it would already be home to others, and against the advice of their druids, they began to exterminate the Túatha Dé Danann.

After a happy and innocent childhood, Joss was on the cusp of becoming a man when the Gaels slaughtered the kings and queens of the Túatha Dé Danann. Left without a mother and father, he must find a way to unite what is left of his people and lead them into hiding. But even broken and scattered, Joss and his people are not without strange powers.

What listeners say about Only the Stones Survive

I have read every book written by this wonderfully gifted author and decided to get this one on Audible for a change. The Narrator was great and the book is Llywelyn’s best yet!! Blending her gift of storytelling, myth and history with wonderful plot and character development !

I started reading the hardcover of this title and was so overwhelmed with all of the characters introduced in the first 2-3 chapters that I gave up. Fortunately, when I found it on audible I gave it another try.

The story is good and complete and the narrator gives it extra flavor with his correct pronunciation of challenging words and melodious accent.

I would have been delighted if a map of the island with landmarks noted from the book was available online or included in the book edition but I think I was able to piece most of it together by the author's details.

I first read this authors books in the mid 1990's and they have aged rather well. Great book full of imagination.

Enjoyed the book, its rich characters. It took me until the fourth chapter to adapt to the strange names of people and places. But then the story came alive for me. Excellent narration.

Just coming off of Red Meridian a month back, this book scratched my historical apocalyptic fiction itch. Where as that book focused on the evil of mankind, this is far more optimistic and its fantasy element reinforces that optimism, highlighting the eduring goodness that accompanies people through thresholds of great upheaval.

May want to brows the Wikipedia page on the tuatha de danann to fill in a little context, but it's not necessary.

Interesting parts but not great

This book was slow. The characters never came to life and the narrator was dull. The story was boring . There were interesting descriptions and parts of the story I liked. I listened all the way to the end so not all bad.

One of Morgan Llewelyn's Best Works

When I think that she could not out due her last piece, she hits it out of the park again. It is wonderful that is her first name is ambiguous: She can write very well from a feminist standpoint as well as from a unenlightened man's mind, and everything in between. The characters were were likeable, the story craft was wonderful, and the narrator was superb! Well done!

Nice little story. It gets really exciting at the end, I wish it kept going. It'd be great to see where the characters go!