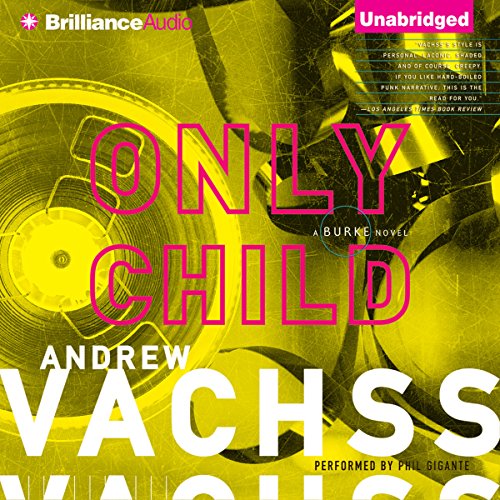 It’s been years since Burke has been home, years since he’s seen his “family” and worked in the underbelly of New York City. Although his appearance has changed, his reputation grown dusty, and his wallet thin, his skills and his crew remain razor sharp. So when he is contacted by a mob boss to investigate the murder of his illegitimate daughter, Vonni, Burke takes the job and begins searching for an unspeakably vicious killer.

Posing as a casting director looking for tomorrow’s stars, Burke reaches out to the high-school students who knew Vonni, and may know the identity of the killer. Before long, he unearths a perverse enterprise: a young director pursuing a brutal new type of cinema vérité.

“Only Child is reliable Vachss, another page-ripping underground procedural with harsh relevance and prose that qualifies the real-life children’s lawyer for his own adjective. (Vachssatious?)” (The Seattle Times)
“The plot is perfect, the investigation is compelling, and the payoff is bittersweet but satisfying.” (The Jacksonville Sun)
“Vachss’s prose is never less than hypnotic. . . . He’s a master at shedding light on grime and human and urban decay.” (Wilmington News Journal)
Show More Show Less

I have read a bunch of Andrews books in fact my son and I love him so much we went to see him when he did a book signing. but it seems like he's trying to get an audience with hot sex. I think talking constantly about bondage and dominatrixs' or whatever they're called is kind of boring especially when the story is supposed to be more interesting and it's not. Back in his first books the stories were amazing and when you know that they had a ring of truth it made them all the better. But now the dog's dead, interesting girlfriend's dead and now it's left to the story to be interesting, to see where his writing skills go. And I didn't see it in this book.