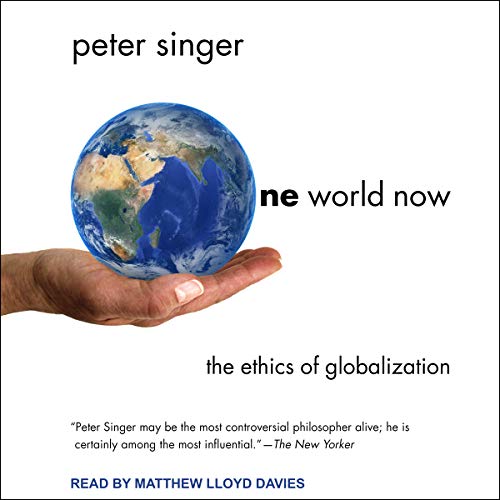 By: Peter Singer
Narrated by: Matthew Lloyd Davies
Try for $0.00

One World Now seamlessly integrates major developments of the past decade into Peter Singer's classic text on the ethics of globalization, One World. Singer, often described as the world's most influential philosopher, here addresses such essential concerns as climate change, economic globalization, foreign aid, human rights, immigration, and the responsibility to protect people from genocide and crimes against humanity, whatever country they may be in. Every issue is considered from an ethical perspective.

This thoughtful and important study poses bold challenges to narrow nationalistic views and offers valuable alternatives to the state-centric approach that continues to dominate ethics and international theory. Singer argues powerfully that we cannot solve the world's problems at a national level, and tells how we should build on developments that are already transcending national differences. This is an instructive and necessary work that confronts head-on both the perils and the potentials inherent in globalization.

"This is a valuable update to a book that excels at examining competing solutions for some of the world's critical economic, environmental, and political problems." (David A. Rezvani, Dartmouth College)

What listeners say about One World Now

Peter Singer manages to merge moral philosophy with a realistic world view to write about the biggest opportunity we have to significantly and effectively decrease suffering, and why we might have the moral responsability to do so.

Peter Singer wrote this book in 2002 and almost 20 years later it seems like it has just been written. A good exercise of thinking about solutions for the present and future as well as the need of a change on the ethics of world if we want to stay alive and living in a beautiful world.