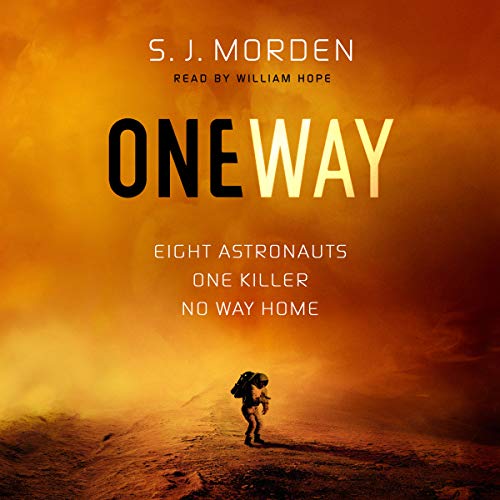 A murder mystery set on the frozen red wastes of Mars.

We stand at the dawn of a new era.

Frank Kitteridge is serving life for murdering his son's drug dealer. So when he's offered a deal by Xenosystems Operations - the company that runs the prison - he takes it, even though it means swapping one life sentence for another.

There has never been a better time to be alive.

He's been selected to help build the first permanent base on Mars. Unfortunately, his crewmates are just as guilty of their crimes as he is - and he'll have to learn to trust them if they're to succeed.

The future of space travel is in safe hands.

As the convicts set to work on the frozen wastes of Mars, the accidents multiply. Until Frank begins to suspect they might not be accidents at all....

There's a murderer amongst them, and everyone's a suspect.

What listeners say about One Way

Private company XO is hired by NASA to build a base on Mars, but XO is keen in lowering costs and cutting corners, and instead of sending an astronaut and several robots to do the job, they decide to send seven convicts with an overseer. These seven convicts have skills that will be useful for building the base, and they are promised freedom on another planet, but they are never told the price they should pay for it.

This was one of the most compelling books I have listened to in the last months. I have a sweet spot for hard science-fiction, I think it is my favorite genre ever, but if the story includes interesting characters, then I will become obsessed with a book, as it happened with this one.

The story starts slowly, but I think the build up is important to get to know Frank and his vision of the world. I was able to feel the anguish and the struggle during Frank’s training, and that put me in the right place when the convicts were sent to Mars, I already knew them and cared for them. Things begin to go south quite soon, and although I had my suspicions on the right place already half-way, this was an exciting and intense read. We witness the events from Frank’s perspective, and although the rest of the characters are not as developed as him, Frank is incredibly well written, with flaws, merits, and an interesting back story.

William Hope did a fantastic job bringing the characters to life, giving each one a unique voice and style, which made following dialogs a breeze. But the real merit was truly becoming Frank, transmitting the character’s complex emotions, and make me feel that he was alive.

This was a book that I could not put down, and which I became obsessed with. The first thing I did after listening to it was going for the sequel.

It Is Apparently Rocket Science!

Seven convicts, offered a choice, life imprisonment or life on Mars. What's not to like?

S J Morden and his fictional XO Corporation blast seven lifers with special skills off to Mars to build a base with which to begin Mars exploration. Morden's bona fide rocket scientist credentials have been used to good effect and he treats us to an enjoyable sci-fi thriller.

This includes in part the problem-solving attributes of The Martian with what is in essence a good old-fashioned murder mystery set on the cold wastes of Mars. With this Mars we aren't talking the relatively gentile world of Agatha Christie though. This is a genuinely frontier land battle for survival.

Morden spends some effort backing up his premise to make it seem credible and if I were a cynic I would suspect there's some real-life experience of modern corporate culture in there.

All in all, not a bad read at all.

gripping and plausible story. well thought out. interesting set of characters. could not stop listening.

A sequel would be nice

To add to to “The Martian” comparison, I would hazard Duncan Jones’ “Moon” was somewhat of an influence too - it certainly gave me that feel in my gut now and again. Anyway I loved it. Some reviewers felt the secondary characters were rather shallowly drawn but I felt they were about right for the plot and a book of this length, so I’ve no complaints there.
For me the story flew by - particularly as I had no desire to listen to any other material once I’d begun and that’s not true of many.

good book but it was way to obvious for the reader that Brack is a killer. author could have implement at least some more uncertaintity. literally in first 40% of the book you could tell what is going on

S.J Morden and William Hope have done a fantastic job bringing this story to life.

The drama, the emotions, the ambiance, the accents and the different strokes of breathing/reading really make you feel not only as if you are on Mars; but as if you are in the same situation of impending doom, millions of miles away on another planet that the main character is in.

One Way is an on the edge of your seat thriller that keeps giving chapter after chapter, putting you though your paces at every opportunity.

Fantastic storyline throughout keeping in line with the technical aspects and realities of everyday functions outside of Earth.

I have already pre-ordered the sequel.

It's really obvious early on who the killer is. Even with edits to the story, it would still be obvious. That kind of ruins the book, as you're left wondering just how dumb the main character is. He's behind you Frank... Oh dear.

Loved this movie sci fi and detective book in one

I want more like this great Mars action and characters you could invest in. thanks

An interesting concept that could never happen.

I'm not a huge sci fi fan so it was with trepidation I started this whodunnit-on-Mars book. The idea of having a group of prisoners going to Mars to be the first humans to set foot on it so that they can build the bases for the true NASA astronauts is intriguing to say the least but there's no way it could happen in reality.
And so after signing their lives away to an evil corporation responsible for the building of the bases the astronauts wake up on Mars and from day one things go wrong but more worryingly it turns out there's a murderer amongst this group of murderers and drug dealers. who's have thought it! One by one the group numbers start to decrease whilst the paranoia increases.
The narrator's reading style is pretty dry but then again that perfectly suits the baron exterior of the planet.
So in the end we have what I can only describe as a mashup between Andy Weir's The Martian and Agatha Christie's "And then there were none ". I've really enjoyed the book which is a surprise to me, the ending is left wide open for a sequel and I'm so pleased to see that there is one coming in Jan 2019 with the same narrator. Roll on next month.

An excellent listen in all sorts of ways, but it isn't a serious exploration of what it might be like to set up a human settlement on Mars. It's more of a moral tale about the things which humans will sometimes be prepared to do in order to get what they think they want or need.

But there's also quite a lot of action and suspense - I highly recommend it.

Not set so far in the future, so no great stretch of imagination.
The readers voice was just right for the story.
Without spoiling the story, just a bit strange that when people started dying, not everyone was under suspicion.
Very enjoyable and easy to identify with the lead character.
Loved it.

Is it worth a credit?

This was my first listen to a novel from S. J. Morden and first narration from William Hope.

I'm not going to over hype this book, I have listened to some really excellent novels before and this doesn't crack my top ten...or twenty.
The story is reasonably enjoyable while quite predictable, but it is worth a listen. I listened to a big chunk of it's 12 hours during my first listen. I did however find it was a solid week before I found myself listening to it again as I just wasn't compelled to need to know what was going to happen in the end, as I basically knew what was coming.

Is it worth a credit? I think so. If you don't have anything you're aching to listen to or struggling to choose something then gie this a try.