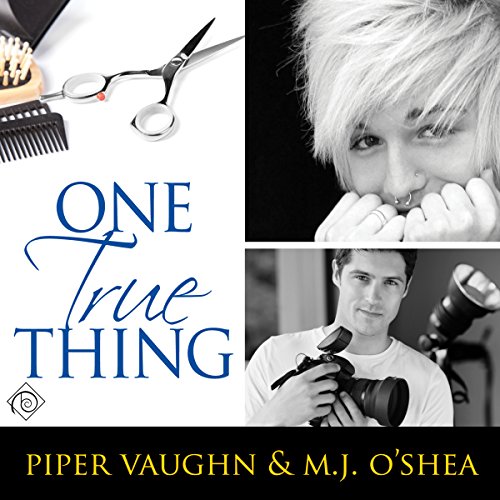 By: Piper Vaughn,M.J. O'Shea
Narrated by: Rusty Topsfield
Try for $0.00

Dustin Davis spent years wishing for a prince, but kissing frog after slimy frog. When he sees Archer Kyriakides for the first time, Dusty thinks his luck has finally changed. Archer could be it. The one. But their hot and cold romance leaves Dusty confused: Why does it feel right one moment and wrong the next? It doesn't make sense - until the day Dusty meets Archer's identical twin, Asher, and realizes he's been seeing them both.

Asher Kyriakides dreams of being a fashion photographer, but he's stuck with a job he hates and an irresponsible playboy brother whose habits drive him absolutely insane, especially when he finds out Archer is dating the cute little blond Asher can't seem to forget. Torn between loyalty and desire, Asher does nothing but try to warn Dusty away.

But when Archer finally goes too far, Dusty turns to Asher for comfort, and Asher knows he can't refuse. It isn't long before they realize they're falling fast, but more than one thing stands in their way, not the least of which is Archer who isn't quite ready to stop being a thorn in his brother's side.

What listeners say about One True Thing

We met Dustin in book one – he’s Rue’s BFF and he had a crush on Rue’s boyfriend for a moment. When Rue and Erik decide to move to LA Dustin follows to help with baby Alice.

Within days of moving to LA Dustin finds himself in lust with a beautiful stranger – who later turns out to be Asher. Asher has a twin, Archer, who is slowly but surely ruining his life.

I think I enjoyed this book more as an Audiobook than in ebook format because the narrator, Rusty Topsfield (aka Aaron Pickering) did a great job with it. His Rue is fantastic and so is Asher. I thought Dusty was just swishy enough and Erik was done very well.

I think that I’d give this audiobook perfect marks except for these things: I thought Asher let Archer get away with too much, Dustin was a bit too “soft” for me, and Rusty had moments where his voice just “lilted” a bit too much.

But overall, it’s a very enjoyable book, a lovely sequel where we get to catch up with Erik and Rue, and the audiobook is definitely the way to go!

This book was sweet in a sort of "Blood isn't always thicker than water" kind of way. There were times I got frustrated with Dusty and Ashton at times due to Dusty being such a chick at times. I like when the bottom is a bottom but I don't want the guy acting like such female to the point that it feels like a straight book. Rusty was great with his performance though. Ashton was an idiot for constantly letting his brother take advantage of him. I guess I didn't like the moments that were so boring to the point that I felt as if the author wanted to make the book longer. The extra was of no significance. If you like drawn out romance books then buy it. Like I said the book was good but it could have been much shorter.

One if my favorite books ... but a horrid audio that is painful to hear

I have loved both One Small Thing and One True Thing since the books were released and have re read both so many times... The books go together ... one immediately follows the other ... The narrators should have stayed the same ... but if not the second narrator should have listened to first book for the accents of the 3 main characters...
All of a sudden when listening back to back Rue gains an exaggerated southern accent ... which is not at all what you hear in the Mid Atlantic states ...
The Narrator over emphasizes every character ...and they all seem to have the same breathless voice ... and sing song quality ... with pauses in odd spaces... it is painful to hear ... awhile this will always be a favorite book - I won’t listen to it a second time - the narration is that bad

I already loved Dusty from Book 1. This made me absolutely love him even more. He went through a lot in book 1 and for him to finally get what he deserved was amazing to watch. Asher is hot and so sweet. They are an adorable couple. This is a sweet story with a little angst. If you haven't read book 1 I highly recommend doing so first. Not only is Rue's story amazing you get the back story of Dusty.

The narration was great. The voices were distinctive. The narrator didn't just read the story he told the story and made it come alive.

I have to mention the cover as well. It is stunning and perfectly portrays what I imagine Dusty looking like.

I look forward to listening to more by the authors as well as the narrator.

I Really enjoyed this book. It may even warrant a second listen at some point.