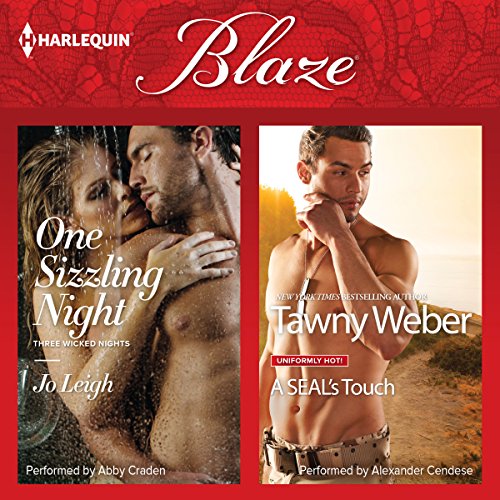 One Sizzling Night & A SEAL's Touch

One Sizzling Night & A SEAL's Touch

Former Black Ops soldier Logan McCabe is in high-tech heaven. The "smart" apartment he's staying at has it all - luxurious amenities, walls that change color, and a seductive and nearly naked woman in the living room. Now that's everything a man can ask for. Except Kensey Roberts is no pixel pinup...and the sexual tension between them is most assuredly real.

Kensey is in way over her head. She's undercover to expose a possible art thief and clear her absentee father's name. She doesn't need a distraction - especially the ex-military, crazy-sexy hot kind. "Captain McBabe" is over six feet of pure, delicious temptation. But one sizzling night won't just compromise her reputation...it could blow her cover sky-high.

Lieutenant Taylor "The Wizard" Powell has a reputation for getting out of tricky situations. Bad guys, bombs, weapons - no problem. Finding a girlfriend in order to evade matchmaking friends? Not so easy. He's banking on contractor Cat Peres to help him out...not realizing his tomboy friend has a whole lot of sexy surprises hidden in her toolbelt.

Cat can't remember a time when Taylor wasn't the object of her hottest dreams - so she can't help but agree to his plan. Their only rule? Friends, no matter what. Except the deliciously hot chemistry that ignites between them takes them both by surprise - and having nothing between them might just ruin everything.

What listeners say about One Sizzling Night & A SEAL's Touch