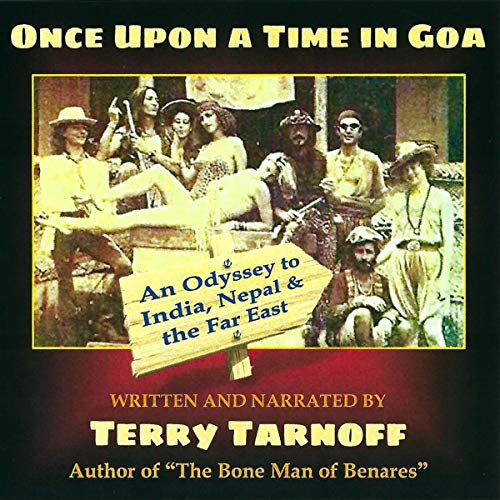 Once upon a Time in Goa

Terry Tarnoff spent eight years during the 1970s traveling throughout Europe, Africa, and Asia. It was the early days of exploring what were to become legendary spots on the traveler's trail. Whether playing the clubs of Amsterdam, skirting the Yakuza in Japan, surviving the winters of Kathmandu, or forming a band in Goa, India, Terry's adventures are alternately engrossing, hilarious and deeply moving.

Once upon a Time in Goa is Tarnoff's long-awaited follow-up to The Bone Man of Benares, a highly acclaimed book, play, and audiobook that told the first half of the story. Once upon a Time in Goa continues the tale, adding new meaning as it looks back from the perspective of modern times upon a period that continues to fascinate people of all generations across the globe.

What listeners say about Once upon a Time in Goa

Terry Tarnoff throws down a highly seductive, melodic voice, which teases, pushes and pulls the listener along in tantalizing rhythms. This is a rollicking, intoxicating romp through a crazy world -- now gone forever -- populated by hippies, poets, sadhus, and musicians. The narrative spills over with brilliant, comedic, often hilarious, absurd situations. Tarnoff takes great pleasure in encountering his fellow travelers -- a torrent of amped-up, larger-than-life actors who populate a bright-lined, cinematic world of yesteryear's expatriates. The dangerous madness of mostly twenty & thirty-somethings living on the other side of the earth, far from the comforts of home, often leads to edifying revelations on the part of the author. The story's highs and lows are served up with witty explosions of vocal phrasing. Tarnoff gives the listener depth as well as humor in his moments of self-discovery, which often border on ecstatic, laugh-out-loud, magical intonations that resonate long after the story has ended.

Once upon a time in Goa

You are transported back to this times ,
the journey , internationals you searchers (Hippy)..moments of magic , brilliant characters , you placed in this story as though you are one with this time , excellent on the senses . Pure and tragic , far out , Thank the Gods for the Hippy soul . 🌍