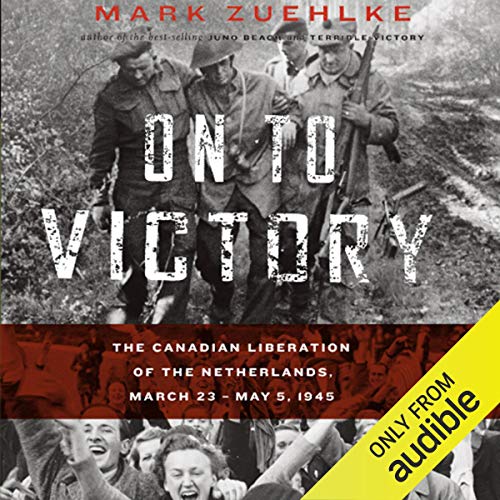 By: Mark Zuehlke
Narrated by: William Dufris
Try for $0.00

It is remembered in the Netherlands as "the sweetest of springs", the one that saw the country's liberation from German occupation. But for the soldiers of First Canadian army, who fought their way across the Rhine River and then through Holland and northwest Germany, that spring of 1945 was bittersweet. While the Dutch were being liberated from the grinding boot heel of the Nazis, their freedom was being paid for in Canadian lives lost.

On to Victory is the story of those final cruel days of the war. From the brutal battlefields of Holland and northwest Germany where a collapsing enemy army still fought with fierce determination, to the unique truce in which the Germans and Allies provided food to millions of Dutch citizens starved almost to death, to those heady moments when each town and city was finally liberated, this is the little-told story of First Canadian Army's last campaign of World War II. With his trademark "you are there" style that draws upon official records, veteran memories, and a keen understanding of the experience of combat, Mark Zuehlke brings to life this final chapter in the story of Canada in World War II.

What listeners say about On to Victory

This is the 5th book I have read of Mark's and I'm not disappointed. his writing an extensive researchdoes great justice to the memory of our Canadian soldiers who sacrifice so much.

I would not recommend this audiobook to a friend, for a couple reasons. Firstly, there are too many names of individuals and units to keep track of; and, most importantly, the narrator is very distracting. He seems unable to speak many common words, such as "the." He sounds clipped and awkward, and some sentences are almost unintelligible. I will never listen to a story narrated by this man again.

If you’ve listened to books by Mark Zuehlke before, how does this one compare?

I have listened to Ortona by this same author and narrator. The same complaint applies for the narrator, but Ortona is easier to follow than this book.

He seems unable to speak many common words, such as "the." He sounds clipped and awkward, and some sentences are almost unintelligible. I will never listen to a story narrated by this man again.