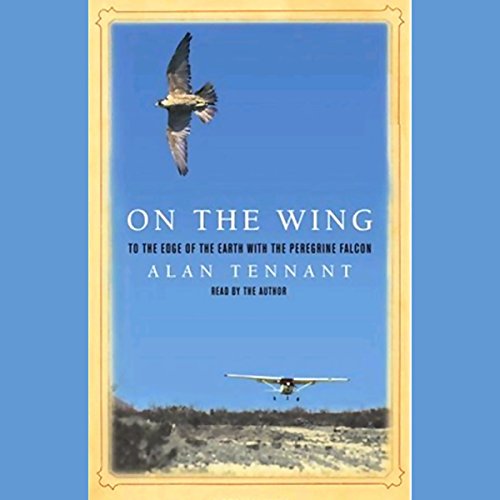 To the Edge of the Earth with the Peregrine Falcon
By: Alan Tennant
Narrated by: Alan Tennant
Length: 5 hrs and 36 mins
Categories: Travel & Adventure, Adventure & Exploration
3.5 out of 5 stars 3.6 (19 ratings)

In this extraordinary narrative, Alan Tennant recounts his all-out effort to radio-track the transcontinental migration of the peregrine falcon, an investigation no one before him had ever taken to such lengths.

On the Wing transports us from the windswept flats of the Texas barrier islands, where the tundra falcons pause during their springtime journey north, to the Arctic, and then south, through Mexico, Belize, and into the Caribbean, in a hilariously picaresque and bumpy flight.

At the helm is Tennant's partner in falcon-chasing, George Vose, a septuagenarian World War II vet who trusts his instincts as much as his instruments. As the two men nearly lose their lives and run afoul of the law in the race to keep their birds in view and their rattletrap Cessna gassed up and running, Tennant renders with gorgeous precision and skill the landscape and wildlife they pass on the way and the falcons that direct their course.

On the Wing is a breathtaking encounter with these majestic birds, the icons of pharaohs, Oriental emperors, and European nobility, whose fierce mien, power, and swiftness have fired the human imagination for centuries. This is an unforgettable tale that speaks to all our dreams of flight.

Thumbs up, Way up, for On The Wing

If you have an affinity for nature and if you like adventure, On the Wing will capture your imagination.

Tennant relates his story as only a Texan can, recounting bold and risky moves executed in pursuit of peregrine falcons in their seasonal migrations. The author's folksy narration is entertaining while his thoughts on our relation to nature and each other is wise and thought-provoking. I loved this book!

What surprised me most...

What surprised me most was to see this book listed in the NYT top 100 books of the year. Then again, that's not always so surprising. I admit that the idea of this book, as well as the publisher's description, had me excited about reading it. I have raised and trained two falcons so there was also a personal interest. You can't fault a publisher for promoting their own book. After all, they have an interest at stake. It would have been worthwhile though, if the publisher had an editor. Who would have immediately edited out about seventy percent of the words. That would have made it much better. Perhaps I'm not being completely fair here. I will admit it. I did not finish this book. I just couldn't. It would also have been a benefit to the book if the author wrote less about himself and more about the bird. The little about the bird was far more interesting. He also should have let someone else narrate it. That would have helped too. Need I go on?

4 of 7 people found this review helpful