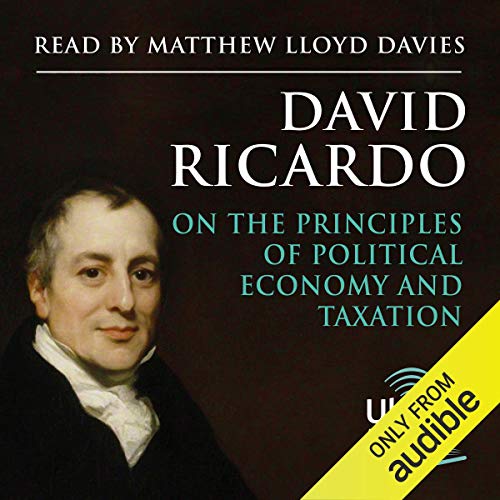 On the Principles of Political Economy and Taxation

By: David Ricardo
Narrated by: Matthew Lloyd Davies
Try for $0.00

The works of the English political economist David Ricardo (1772-1823), and particularly his most important work, The Principles of Political Economy and Taxation, lie at the heart of the laissez faire school of economics, preceded by Adam Smith and followed by John Stuart Mill.

Economic growth, economic freedom - free trade rather than mercantilism, or controlled trade - was the fundamental attitude. Having been disowned by his Sephardic Jewish family for marrying outside the faith at the age of 21, Ricardo went on to make his own fortune, notably gaining ‘a million sterling’ by speculating on the outcome of the Battle of Waterloo. But it was with The Principles of Political Economy and Taxation (1817, revised 1821) that he placed his name in the history of economics.

He expanded Smith’s ideas on the ‘labour theory of value’ and the theory of distribution. In the first, Ricardo argued that competitive market conditions linked the value or price of goods to the labour costs of producing them. In the second, he said that national product emerged from three social classes: wages for labourers, profits for owners of capital, and rents for landlords and that a benefit for one incurred a loss for another. Underpinning all this is his insistence that free trade, rather than protectionism - allowing international and domestic markets to operate without controls - was ultimately beneficial to all, though changing conditions result in occasional fluctuations. His work proved of lasting influence through Karl Marx and down to the present day.

This is a well read classic in economics. Although the topic may well seem musty, a big part of this book is involved in one way or another, in assessing Smith's claim that a single staple commodity such as corn or wheat effectively functions as the hub around which all other valuations arrange themselves. The other major thrust of the book is to investigate in much greater detail how the system of land rents interacts with land productivity of varying qualities of land and their differential productivity, and the overall level of market demand, to set rents, prices, and wages. In an indirect way, neither of these things goes away fully in a modern market where money is not anchored to a gold standard, and where agriculture makes a diminishing portion of the global economy.

Probably the one downside to note for someone who has not read Ricardo in depth is that Essay on the Funding System, typically considered the origin of Ricardian Equivalence, is not a part of this work. The germs of this idea are very evident in many places, however, in this work, which was written only a few years earlier, and even if this principle seems to fail in many places in a modern economy, it is still widely discussed and is worth understanding on the basis of its origin. Also I think that it is easy to follow along with this book without having read David Buchanan or Thomas Malthus in detail, but it would be very difficult to follow this book without having read Adam Smith (Wealth of Nations particularly), since such a large portion of the book is dedicated to critiquing Dr. Smith.

Probably the biggest chance on this work was, given the lack of reviews, the quality of the narration. It was generally very good. There were some rare instances where it was difficult to follow when listened to in a noisy environment, such as a car, for me as an American English speaker. But the quality overall is good.