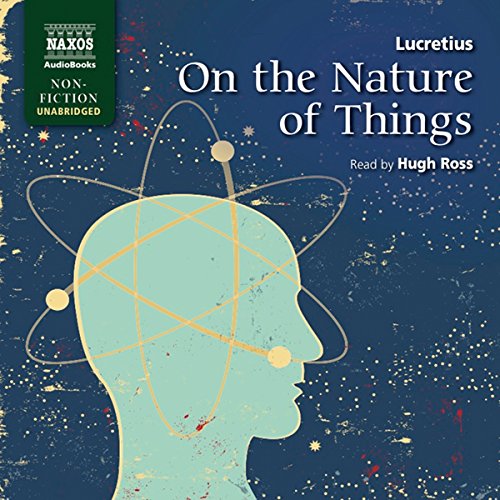 On the Nature of Things

By: Lucretius
Narrated by: Hugh Ross
Try for $0.00

Lucretius was born in 99 BC, and On the Nature of Things is his only surviving work. His aim was to free the Roman world from its two great terrors: the gods and death. Lucretius argues that the gods are not actively involved in life, so need not be appeased; and that death is the end of everything human - body and soul - and therefore should not be feared. But On the Nature of Things is also a poem of striking imagery, intimate natural observation and touching pathos. It is one of the most influential writings in Western thought.

What listeners say about On the Nature of Things

a fascinating text, beautiful verse in an easy style, very well told. the opening creation story, a hymn to
Venus, is an eloquent poem in itself. Interesting ideas, including early secular humanism, the elevation of science, an explanation of the atomic theory 2000 years ahead of its time.

Lucretius' manner of thinking is intriguing. I wonder if he would be a great scientist if he were alive today . Maybe he would only be an armchair philosopher, but I wonder what his poetry would be like in any case.

This poem is one of the greatest I've ever read - Ian Johnston's translation, based on the prose translation by H.A.J. Munro, was riveting. Johnston's footnotes were helpful.

The narrator (Hugh Ross) adds to the charm of this magnificent poem.

Hugh Ross is so great that I checked for other audiobooks narrated by him and added seven more books to my wish list.

I would recommend this audiobook to anyone who is interested in brilliant thinkers from ancient times. The narrator proves that a book can be even better with great narration.