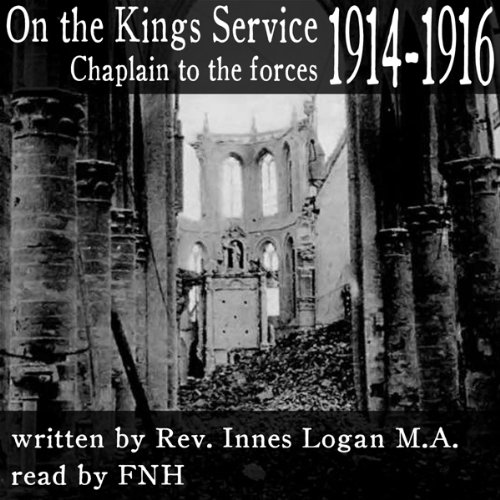 On the Kings Service

On the Kings Service

FNH Audio presents an unabridged reading of On the Kings Service. Rev. Innes found himself at a recruiting barracks when the first world war broke out. In this narrative ,he reports on how vast numbers of volunteers sweapt into the barracks, which found itself desperately short of material to clothe and equip so many men. His duties soon move him over to France, where, in between his religious duties, he finds himself helping in the hospital with the vast number of wounded that came back from the lines. We then follow him towards the front, where his medical and religious duties combine to allow him to give comfort to the men and a mere medical hand could not procure.

The book is made up of anecdotal memories and occasional reports from the front that combine to give the listener a small insight into how a religious man lives and operates behind the front lines.

I found it a bit romantic

I listed to an abridged audiobook version. It's a simple lovely description of his experience of war. This version seems to lack a depth. It feels reasonably descriptive, but don't see so much of the Reverend in his narrative. If I had to guess, this seems like something to support the troops so is somewhat romantic, somewhat stiff upper lip. I got a little of his work as Chaplain, seems to be mostly focused on everyone else, but with few people to follow.