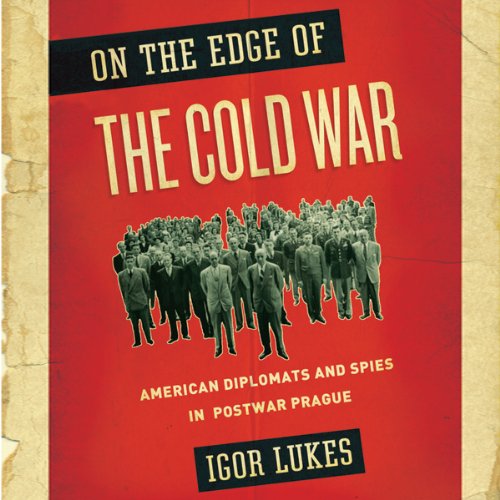 On the Edge of the Cold War

On the Edge of the Cold War

By: Igor Lukes
Narrated by: David Kaplan
Free with a 30-day trial

In 1945, both the U.S. State Department and U.S. Intelligence saw Czechoslovakia as the master key to the balance of power in Europe and as a chessboard for the power-game between East and West. Washington believed that the political scene in Prague was the best available indicator of whether the United States would be able to coexist with Joseph Stalin's Soviet Union.

In this book, Igor Lukes illuminates the end of World War II and the early stages of the Cold War in Prague, showing why the United States failed to prevent Czechoslovakia from being absorbed into the Soviet bloc. He draws on documents from archives in the United States and the Czech Republic, on the testimonies of high ranking officers who served in the U.S. Embassy from 1945 to 1948, and on unpublished manuscripts, diaries, and memoirs.

Exploiting this wealth of evidence, Lukes paints a critical portrait of Ambassador Laurence Steinhardt. He shows that Steinhardt's groundless optimism caused Washington to ignore clear signs that democracy in Czechoslovakia was in trouble. Although U.S. Intelligence officials who served in Prague were committed to the mission of gathering information and protecting democracy, they were defeated by the Czech and Soviet clandestine services that proved to be more shrewd, innovative, and eager to win. Indeed, Lukes reveals that a key American officer may have been turned by the Russians. For all these reasons, when the Communists moved to impose their dictatorship, the U.S. Embassy and its CIA section were unprepared and powerless.

The fall of Czechoslovakia in 1948 helped deepen Cold War tensions for decades to come. Vividly written and filled with colorful portraits of the key participants, On the Edge of the Cold War offers an authoritative account of this key foreign policy debacle.

What listeners say about On the Edge of the Cold War

brilliant book but unbearable to listen to. Read with a most mechanical voice and not a single czech name or word is pronounced correctly. sad when it's a book about czech history.

I have no issue with the content; it is a historical text and frankly not much more than a narrated and detailed thesis (dry dry dry!) The real issue is the narrator. It is voiced by an American (no problem here naturally), however they could have chosen one who is familiar with foreign pronunciation. Instead whenever he regularly cocks-up a tricky word, the track is edited and very obviously over-dubbed with the correct pronunciation. Furthermore, mid-book I found myself re-listening to several passages to which I had just listened due to poor editing. Sadly the narration and editing really doesn't do the book justice but I am loath to be overly critical because it is a niche book whose generated income probably wouldn't justify the cost of re-recording. Thus I am at pains to highlight that if you are using this text as part of your research then stick with it, because it is a useful tome!

He really needs to familiarise himself with the pronunciation of foreign words.