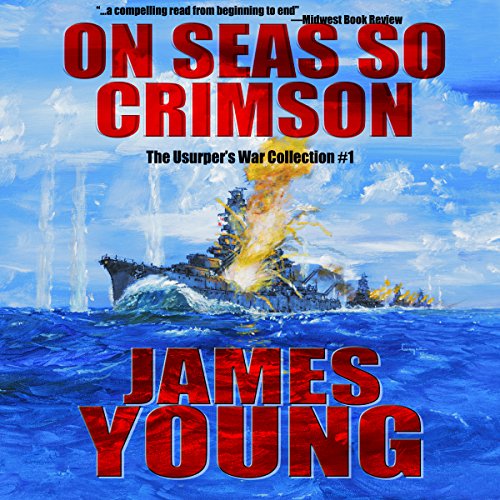 On Seas So Crimson

This is a collection for James Young's Usurper's War. It contains Acts of War and Collisions of the Damned

"Author James Young shows himself to be a master of that science fiction sub-genre called 'Alternate History'." - Midwest Book Review

Adolf Hitler is dead. Great Britain lies prostrate, subdued under a storm of poison gas and incendiaries that have turned the great city of London into a blazing abattoir. The Royal Family's whereabouts are unknown, while Heinrich Himmler, new Fuhrer of the victorious Reich, prepares to dictate terms.

For RAF Squadron Leader Adam Haynes, London's destruction is the nightmare outcome of years spent fighting the specter of Fascism. With his own combatant status uncertain, Adam must rush to save as many of his Polish-speaking pilots as he can.

Great Britain's subjugation also has an immediate effect on Lieutenant (j.g.) Eric Cobb. Thrust unwillingly into combat between the Royal Navy and the Kriegsmarine, Eric must immediately make choices that not only affect himself, but will alter the course of history.

In the Pacific, Rear Admiral Tamon Yamaguchi witnesses firsthand the myriad opportunities that Germany's victory has provided for Japan. Defeated in China by Soviet forces after the Imperial Army foolishly attached northwards in December 1941, Japan has not only changed governments to a Navy dominated cabinet, but also changed strategies. It is to the south, in the oil rich Dutch East Indies, that Nippon will find her destiny. Yamaguchi, as the new head of the Kido Butai, must develop a plan that prevents American interference while simultaneously husbanding the Imperial Japanese Navy's strength for a single, great decisive battle.

What listeners say about On Seas So Crimson

On Seas so Crimson. Loved this alternative history and can't wait for the next in the series.
It is a complex history but it is well laid out and fairly easy to follow.
Excellent narration.
I received a free copy of this audio book at my own request and voluntarily leave this honest review..

I was not familiar with this genre, but shortly after starting I was hooked. As a retired naval officer myself, the story development, characters, weapons, tactics, etc. all seemed quite accurate. I look forward to listening to more in the series. I thought the narrator did a nice job of all the diverse character accents across the Axis and Allied forces.