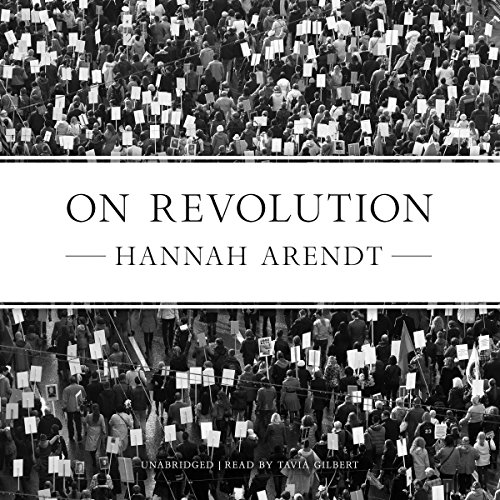 By: Hannah Arendt
Narrated by: Tavia Gilbert
Try for $0.00

Hannah Arendt's penetrating observations on the modern world, based on a profound knowledge of the past, have been fundamental to our understanding of our political landscape. On Revolution is her classic exploration of a phenomenon that has reshaped the globe. From the 18th-century rebellions in America and France to the explosive changes of the 20th century, Arendt traces the changing face of revolution and its relationship to war while underscoring the crucial role such events will play in the future. Illuminating and prescient, this timeless work will fascinate anyone who seeks to decipher the forces that shape our tumultuous age.

What listeners say about On Revolution

This is a fascinating analysis of the differences between the American and French Revolutions and how those differences led to very different results. Arendt also analyzes how circumstances that appeared in the French, but not the American, Revolution played out in subsequent revolutions, particularly the Russian Revolution.

Arendt identifies two aspects of successful revolutions: (1) liberation, the violent overthrow of the old order, and (2) freedom, the creation of a new order, particularly through constitution making. Unlike historians such as James Beard, she does not see the American Constitution as a conservative abandonment of the Revolution, but rather its successful conclusion. She faults the French, and later the Russian, Revolutions for never getting past the violence stage. As a result, they never successfully established freedom and eventually fell victim to despotism.

She credits the American success in creating a new order to two main influences. The first was the colonial experience with self-government, particularly because most of the local institutions had been created de novo by the colonists themselves. This experience gave Americans the recognition of the need for forms of government and also the confidence with their ability to create such forms. The French, and later the Russians, coming out of absolutism, had neither. In America, society was viewed as good, again mostly because it was self-created, and as a way to curb antisocial instincts. In France, however, society, which had been composed of the aristocracy, was viewed as corrupting the natural virtue of man. The Americans therefore valued social organizations, while the French distrusted them.

Because the Americans had created their own local governments, the colonists did not destroy such institutions in their overthrow of the old order and could use those governments to create new structures to replace those they had destroyed. The French, when they overthrew the all-encompassing ancien regime, had nothing left upon which, or with which, to build a new order, for the Estates General was part of the old order.

The second main influence was the relative lack of economic inequality among American whites. Arendt recognizes that there was significant economic inequality in America, but the colonists did not include slaves within their revolution, while the sans culottes seized the initiative in France. The economic inequality was so great in France that social issues quickly took precedence over the political issue. Arendt argues that the intractability of the social issues caused the French to look for culprits to blame for the lack of progress. The urgency of the social issues themselves and the necessity to find culprits, in effect traitors to the revolution, led to a constant state of revolution, in which the search for new enemies led to the Reign of Terror, as the revolution devoured its own. Necessity trumped freedom.

Arendt distinguishes between power and law. In both the American and French Revolutions, power was recognized to lie with the people, but Americans created the federal and state constitutions as sources of law. In fact, Americans began creating their own state governments even before the Declaration of Independence, as part and parcel of the Revolution. In France, without new forms of government, the people were also the source of the law, and the law could change frequently as the moods of the people changed.

Arendt credits America’s success in establishing lasting forms of government with the separation of powers, creating checks and balances. She also credits our acceptance of a two-party system, although she neglects the extent to which the “spirit of party” was decried in the early Republic. From such acceptance, however, comes the recognition of the legitimacy of an opposition. She says that the lack of such legitimacy, when opposition is considered subversive, is the path to totalitarianism, a subject on which she was also an expert.

In fact, she seems to see the only flaw in the American Constitution besides slavery as the lack of recognition of direct participation in government through venues such as town meetings. She saw that such participation gives people experience with, and ownership of, the process of governance. Without it, government can become distant, which may help explain our low voter turnouts and alienation from government.

Arendt has done a masterful job comparing and contrasting the American and French Revolutions and carrying her analysis forward through the Revolutions of 1848 and the Russian Revolution. Her claims to explaining all revolutions, however, fall short. While she mentions the Glorious Revolution of 1688 and the Chinese Revolution, I wish she had analyzed the 17th century Dutch wars of independence from Spain, the Latin American revolutions of the 18th and 19th centuries and the Irish Revolution of the 20th century. In particular, the Haitian Revolution does not seem to fit Arendt’s model. The slaves certainly had no experience with self-government, and the social issues were extreme, but the revolution did lead to a form of constitutional self-government.

this bThis book is more important today than it was when it was written.

Last year Hannah Arendt's book the Origins of Totalitarianism helped me to make sense of the election of Donald Trump in a larger historical context probably moreso than any other book--and I read a few, trying to figure out what happened. Now this book is helping me to think ahead and to understand the difficulties we're facing better. I and the few Arendt fans I know were surprised that Arendt chose the American Revolution as her model and major theme in this book. There are very good reasons for her to do this--but you'll have to read the book to find out what they are.

Hannah Arendt’s “On Revolution” is a paean to religious belief. God’s relevance is at the heart of her detailed history of revolution. Arendt is an ardent secularist. Arendt’s belief or non-belief in God has no relevance except as it relates to her understanding of revolution.

“On Revolution” compares the differences between ancient Greece and modern times. Arendt particularly contrasts America’s 1776 revolution with France’s 1789 revolution. She explains why one succeeded and the other foundered. Her explanation offers insight to the failures of past, present, and future revolutions.

Arendt argues any success after a revolution depends on the institution of laws that supersede individual human desire. She amplifies the reasons for all revolutions’ success or failure. America’s short history as a colony with a remote King (burdened by parliament) contrasts with France’s history of a long line of King’s with divine right of rule. America is not burdened by a King who has God’s authority to rule. Arendt suggests invoking God’s commandments (a superior being’s directions) allows human rule-of-law to be acceptable to America’s colonial citizens.

The only philosophical backdrop for a French citizen’s authority is Rousseau’s philosophical belief in democracy, equality, liberty, and the common good of all citizens. This is not enough to convince France to accept man-made’ rule-of-law. There is no divine right given by God to a King or any French citizen. Arendt argues rejection of divine right is at the heart of France’s failure.

A fundamental point made by Arendt is that many revolutions appear to succeed because they capitalize on events that occur in the uncontrolled circumstances of revolution. It is not because of a belief in a cause fomented by a great leader but by an opportunist who takes advantage of events.

Among her many observations Arendt offers a blueprint for a revolution’s success. Of course, success is not necessarily in the best interest of a country’s citizens. If citizen control is the only measure of success, Russia, China, North Korea, Pakistan, and Iran have had successful revolutions. Today’s example of revolution is Haiti. One wonders which route it will take in its revolution.

One of the original thinkers of the 20th century

Hannah Arendt is one of the finest thinkers, quotable and original. Highly recommended.

Interesting but tough to listen to

Turns out it’s difficult to focus on dense constitutional theory in audio format. Very interesting book, has some profound insights about republican governance and the problem of establishing authority. But sometimes difficult to follow, had to rewind a lot. Also, she focuses almost entirely on the American and French revolutions. I was hoping for a broader discussion.

Fantastic book, I will reread

... only negative... I HATE long quotes in other languages without translations, a real pain when listening and I cannot even search the translation... If I spoke French, I’d have bought the book in French.

An excellent book that I cannot recommend enough, Arendt’s thought is a welcome reprieve to both boorish ideological stricture and the desperate necessity we are mired in today. She offers a glimpse of a different way forward, and however ones conclusions differ from her own, our encounter with them is valuable.

Arendt is a true and brilliant political thinker

If you are tired of what passes for political thought in the daily barrage of media noise listening to Arendt distill Western Political thought to its essence is like slipping into a clear, cool oasis for the mind.

hanah tells us our own history
great book. should be required reading but felt like audio was a bit choppy.