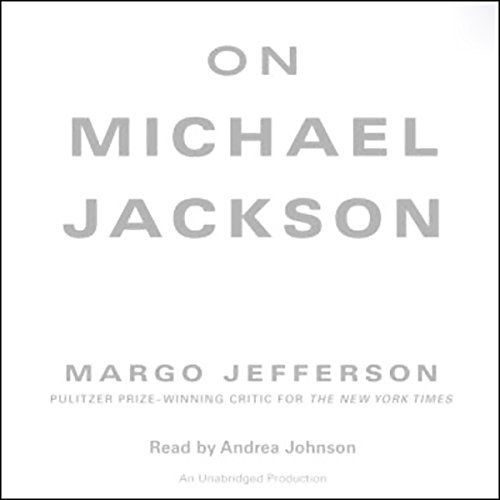 By: Margo Jefferson
Narrated by: Andrea Johnson
Try for $0.00

Michael Jackson was once universally acclaimed as a song-and-dance man of genius; Wacko Jacko is now, more often than not, dismissed for his bizarre race and gender transformations and confounding antics, even as he is commonly reviled for the child molestation charges twice brought against him. Whence the weirdness and alleged criminality? How to account for Michael Jackson's rise and fall? In On Michael Jackson, an at once passionate, incisive, and bracing work of cultural analysis, Pulitzer Prize-winning critic for The New York Times Margo Jefferson brilliantly unravels the complexities of one of the most enigmatic figures of our time.

Who is Michael Jackson and what does it mean to call him a "What Is It"? What do P. T. Barnum, Peter Pan, and Edgar Allan Poe have to do with our fascination with Jackson? How did his curious Victorian upbringing and his tenure as a child prodigy on the "chitlin' circuit" inform his character and multiplicity of selves? How is Michael Jackson's celebrity related to the outrageous popularity of 19th-century minstrelsy? What is the perverse appeal of child stars for grown-ups and what is the price of such stardom for these children and for us? What uncanniness provoked Michael Jackson to become "Alone of All His Race, Alone of All Her Sex," while establishing himself as an undeniably great performer with neo-Gothic, dandy proclivities and a producer of visionary music videos? What do we find so unnerving about Michael Jackson's presumed monstrosity? In short, how are we all of us implicated?

In her stunning first book, Margo Jefferson gives us the incontrovertible lowdown on call-him-what-you-wish; she offers a powerful reckoning with a quintessential, richly allusive signifier of American society and popular culture.

"Jefferson writes...with elegance and attitude....One closes the book hungry to hear her take on other talented but troubled celebrities." (The Washington Post)

"Sparkling....Eloquent and provocative.... Watching Margo Jefferson's mind at work is as pleasurable and thrilling as seeing Michael Jackson dance."  (O, The Oprah Magazine)

What listeners say about On Michael Jackson

The tone of this book is that of an author who had an axe to grind regarding the King of Pop (and most of his family members).

95% of the book is nothing but condemnation of Michael's lifestyle, clothes, skin, and surgeries instead of praising him for his talents and
monumental contributions to many social causes.

The author frequently used derogatory words to describe people. She repeatedly referred to Michael as a "freak," gays as "queer,"
transgendered as "tranis." She compares Michael to oddities made famous by Barnum & Bailey Circus in the old days.

There were two reasons I purchased and listened to this book.

First, there are few books on audio about Michael Jackson as I write this.

Second, I was impressed that the author has a Pulitzer prize, a theatre critic at The New York Times and a full-time professor at Eugene Lang College the New School for Liberal Arts.

Only the last 53 minutes of this 3.5 hour book have any redeeming value as that was about the molestation trial, of which he was acquitted on all counts! To her credit, the author did a decent (but not great) job writing about that topic.

The remaining 3 hours of this book, along with the author's Pulitzer, belong in the toilet, as this is one of the worst books I have ever read or
listened to!

Creates a concise and meaningful interpretation of what Mr. Jackson means to humanity in so many facets: his Freudian duality, morphing sex and sexuality, his skin as an argument to the history of race and species, and as a child star in tragic self-flagellation. Worth a second listen.

This book is about the overall, big-picture of Michael Jackson. The narration is good. Literary and analytical, this book compares and contrasts Michael Jackson to various people throughout entertainment history.