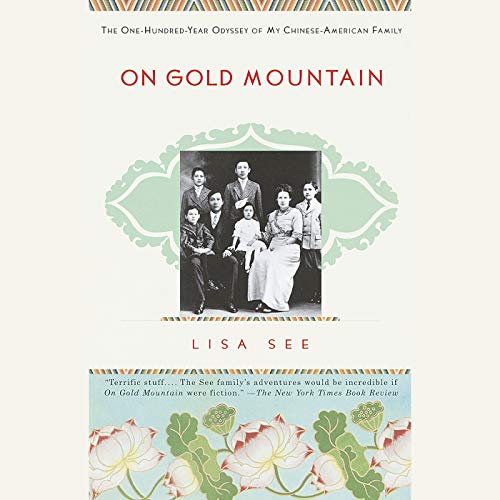 Out of the stories heard in her childhood in Los Angeles's Chinatown and years of research, See has constructed this sweeping chronicle of her Chinese-American family, a work that takes in stories of racism and romance, entrepreneurial genius and domestic heartache, secret marriages and sibling rivalries, in a powerful history of two cultures meeting in a new world.

The result is a vivid, sweeping family portrait in the tradition of Alex Haley's Roots that is at once particular and universal, telling the story not only of one family, but of the Chinese people in America itself, a country that both welcomes and reviles immigrants like no other culture in the world. On Gold Mountain was a national best seller and a New York Times Notable Book.

"Astonishing.... A comprehensive and exhaustively researched account of a Chinese-American family... that juggles such explosive elements as race, class, tradition, prejudice, poverty, and great wealth in new and relatively unexpected combinations." ( The Los Angeles Times)

What listeners say about On Gold Mountain

Would you listen to On Gold Mountain again? Why?

NO! I couldn't stand the narrator, despite my extreme motivation to listen, as my family has Chinese connections of great interest.

I got through 15%, and despite my motivation to learn more, I ordered the printed book and will ask for a refund for the recording...the narrator was extremely off-putting.

Has Lisa See listened to the narration? Despite the great reviews she has, I would NEVER listen to her narrate again!

Insights onto the lives of Chinese in the USA. Detailed research. A fascinating story of a family tree. But I really missed Lisa See's enchanting language which she is so good with! Of course, one has to remember that this is more like a documentary work of literature, not a novel.

Why Lisa See does not look Asian!

Yes I always wondered if she was Chinese and now I know that, yes she is. This nonfiction book on the background of See's background is interesting. Not a great new adventure story, but a true untraditional events that transpired starting with the many Chinese brought to the USA to work on the railroad. This isn't one on See's magnificent stories, but her real research on her ancestry is written in her wonderful style. If you can't get enough of See, and have not tried nonfiction, get this!

If you could sum up On Gold Mountain in three words, what would they be?

Amazing story! Not only was it well told, but I learned so much about the Chinese culture. It gave me a better understanding of what immigrants face coming to our country.

While at times slow, this story was interesting and tells the true story of a family who lived during such an interesting time. I enjoyed it and would recommend it.

The Reader is sub par. She didn’t learn how to pronounce the Chinese and Latin words which was irritating. Expected better. Had to hear the whole story so I put up with her.

This book was a little repetitive is to me and I didn't find it as exciting as I thought it might be.
I did enjoy how it was sectioned in to years so I could compare what was happening in America during that time
😋

This is such a great story and look into the history of Chinese immigration to the US. Wonderful characters and description of the time period.

I enjoy her books. This was a bit long and very detailed bit taught me much about the history of the Chinese in California. Thank goodness for long drives. Not an exciting book but was quite informative.

From the start this story sucked me in. Lisa See is an amazingly talented storyteller.
I have been many of the locations in California that she mentions. The locations in China I will most likely never see but through her story I feel like it is all alive! Simply magnificent.