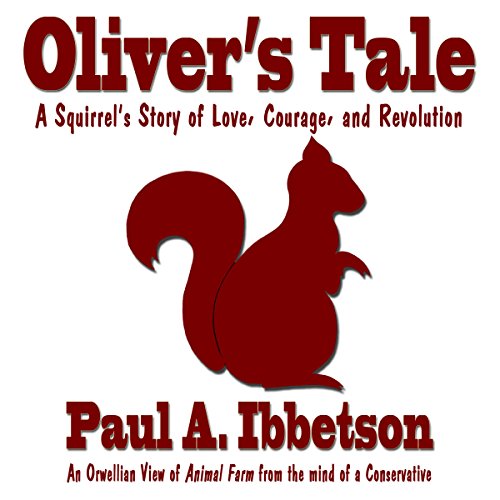 A Squirrel's Story of Love, Courage, and Revolution
By: Paul A Ibbetson
Narrated by: Sarah Pavelec
Length: 9 hrs and 3 mins
Categories: Fiction, Religious & Inspirational
5 out of 5 stars 4.8 (5 ratings)

By: Paul A Ibbetson
Narrated by: Sarah Pavelec

Radio host and author Paul A. Ibbetson's fictional version of Animal Farm with a conservative twist. The delightful tale of Oliver the Squirrel unfolds on this departure from the conservative political discussions found previously in Ibbetson's books.

Oliver's Tale is a thinker's piece and while written in the same spirit as George Orwell's Animal Farm it has its own unique social, political, and religious message to be discovered by readers. Surrounded by a colorful cast of animal characters, Oliver experiences a spiritual growth in his relationship with God as he becomes privy to the secret plan of the Gray Skunk, the most mesmerizing and dangerous foe the Cove has ever faced.

Following God's instructions, Oliver will be taken on an adventure in both the forest and city to save not only himself, but all that he holds dear. Oliver's Tale is the story of how one very average squirrel became a servant of God and led a revolution to save the animals of Three Fingers Cove.

This audiobook has several twists, including the "special power" of the book's adversary, the Gray Skunk, as well as his ability to control the most dangerous animals of the forest. Readers will be uplifted by this book as they will identify with Oliver's challenges, struggles, and victories as they mirror the daily challenges of life despite taking place in a fantasy world. Because Oliver is a cute little squirrel and such a likeable character, his feats of courage throughout the story become even more amazing.
©2010 Paul A. Ibbetson (P)2014 Paul A. Ibbetson

If you could sum up Oliver's Tale in three words, what would they be?

What was one of the most memorable moments of Oliver's Tale?

The end when God gave Oliver the courage and strength to overcome the evil.

Sarah Pavelec, the narrator, has a voice that is easy to listen to and I enjoyed the unique voices she gave to each of the many characters. I was so impressed with how she could keep each voice sounding the same from the beginning of the story to the end.

If you could rename Oliver's Tale, what would you call it?

The inspiration for this book is indeed a bit like "The Animal Farm" by Orwell, and even though I don't think it was anywhere as successful in the society analogies and message transmitted, I do think of it as a very cool tale.
The story does take a very long time to become interesting. It did it for me when Oliver ends up in the "city". The story finally gets action, suspense and you finally start to get interested in what will happen next.
I do think the narrator did a very good job, so i would definitely recommend to get the audio version for this one.
This book is suppose to be an interesting reflection about the views of the society (socialism vs capitalism) and socialism dangers. It's clearly pro capitalism and christian minded - so it loses the more impartial social critic.

Me and my daughter loved it!

Well I first got this book to review I thought how can I give it an honest review. Just because I like a book about talking squirrels and woodpeckers doesn’t mean children will. Having a daughter the perfect age for this book I started to play an hour every night as I put her to bed. I knew when she started discussing the book during the day that she liked the book. She especially thought it was funny the first we’ve heard of the argument the older squirrel on tippy top and a woodpecker I have every morning. So I asked her if she really liked it kind a liked it or didn’t like it and she said she really liked itShe is the one who told me to read it five stars. So this comes on high recommendation when I say Oliver is a great book for children and parents. It gives you plenty of opportunity to discuss God helping others getting along with those who are different ET see. I loved it and can’t wait to get more books to share with my daughterg