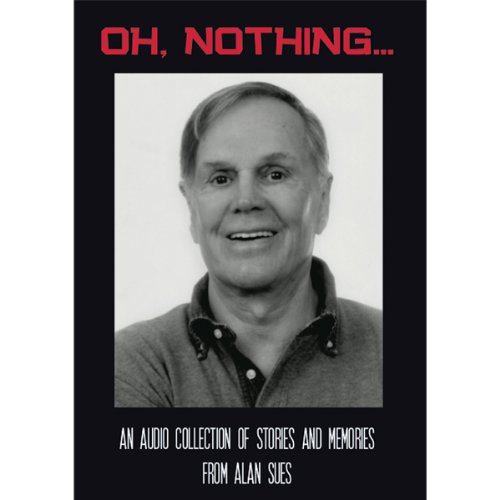 An Audio Collection of Stories and Memories from Alan Sues
By: Alan Sues
Narrated by: Alan Sues
Length: 2 hrs and 7 mins
2.5 out of 5 stars 2.5 (2 ratings)

Best known for his work on Rowan and Martin’s Laugh-In, comic actor and performer Alan Sues made his debut on Broadway in 1953’s Tea and Sympathy with Deborah Kerr. He had a supporting role in The Americanization of Emily with James Garner and Julie Andrews, portrayed Wilfred Jr. in the famous Twilight Zone episode “The Masks”, and successfully continued to work in film, theater, and television for over 50 years!

This audio collection is not an autobiography, stand-up comedy, or a tell-all exposé about Hollywood and show business. It’s akin to to an evening at a friend’s house, where you start talking over dinner, and finish by telling funny stories over cocktails or dessert. From his hilarious first professional upstaging experience with Miriam Hopkins in Happy Birthday, to his early days in New York City trying to hold several part time-jobs in order to allow time to audition, to the unbelievably side-splitting technical meltdown happening around him during hosting the Macy’s Day Parade on live television, Alan’s stories don’t disappoint.

This audio set is the perfect purchase if you are a long-time fan of Alan’s or a new fan who recently discovered him. In fact, anyone who loves backstage stories and showbiz scenarios will enjoy Oh Nothing... on more than one listening and for years to come.

I enjoyed hearing Alan's stories of shw business, especially after growing up with him on Laugh-in. Baby Boomers will enjoy hearing Alan's life story.

His stories of show business

Sometimes a little hard to understand.

Did Oh, Nothing… inspire you to do anything?