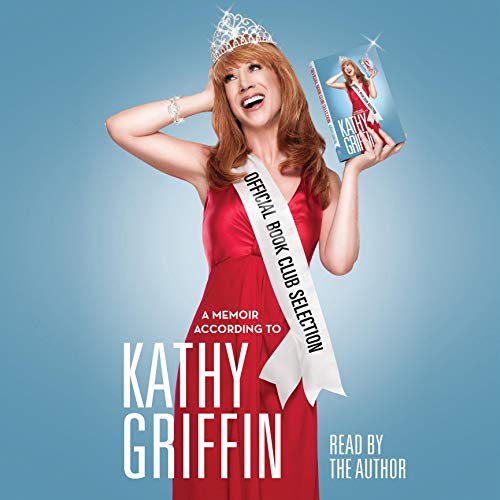 Official Book Club Selection is Kathy Griffin unplugged, uncensored, and unafraid to dish about what really happens on the road, away from the cameras, and at the star party after the show. (It's also her big chance to score that coveted book club endorsement she's always wanted. Are you there, Oprah? It's me, Kathy.)

Kathy Griffin has won Emmys for her reality show Kathy Griffin: My Life on the D-List, been nominated for a Grammy, worked and walked every red carpet known to man, and rung in the New Year with Anderson Cooper. But the legions of fans who pack Kathy's sold-out comedy shows have heard only part of her remarkable story. Writing with her trademark wit, the feisty comic settles a few old scores, celebrates the friends and mentors who helped her claw her way to the top, and shares insider gossip about celebrity behavior - the good, the bad, and the very ugly. She recounts the crazy ups and downs of her own career and introduces us to some of the supertalented people she encountered before they got famous (or, in some cases, after fame went to their heads). Word to the wise: If you've ever crossed Kathy Griffin at some point in your life, check the index for your name.

Along the way, Kathy reveals intimate details about her life before and after she made the big time. She opens up about everything from growing up with a dysfunctional family in suburban Illinois to bombing as a young comedian in L.A., from her well-publicized plastic surgery disasters to her highly publicized divorce, and more. Only in this book will you learn how the dinner table is the best training ground for a career in stand-up, how speaking your mind can bite you on the ass and buy you a house, and which people in Kathy's life have taught her the most valuable lessons - both inside and outside the entertainment industry.

Refreshingly candid and full of hilarious "Did she really say that?" moments.

HONESTY Is WHAT MAKES KATHY SO 'HUGE'!

Love the honesty, and no holding back on anything authenticity of Kathy Griffin!. . . The good, the bad, and the ugly. . .

So impressed with how hard she works, and the appreciation she always extends to her fans.

Hope she's around for a LONG time! :)

Feels like Kathy is talking, not reading, to you

Would you listen to Official Book Club Selection again? Why?

Absolutely. Kathy tells a lot of stories within her story and its impossible to catch all of the details on the first pass. I listened to a few chapters more than once on my first pass through the book, and laughed harder each time. I also teared up, too, but most of Kathy's stories aren't too heavy.

What other book might you compare Official Book Club Selection to and why?

Happy Accidents: A Memoir (by Jane Lynch) is what I am listening to now and is definitely a book you could compare to "Official Book Club Selection" basically becuase they are both memoir's of comedic women in Hollywood. However, unlike Kathy, Jane is reading her book to you; Kathy is having a conversation with you except she can't you talking back. LOL!

It was definitely a book I would have listened to all at once if I ever had that kind of time. You cannot get bored by Kathy's stories and because its conversational, you never tire of her voice since its constantly changing while she tells her story and full of emotion.

This is a fun listen. Kathy's conversational "reading" style makes it feel like she's just hanging out with you chatting about her life. For Kathy Griffin fans, this is must. For those not as familiar with her, give it a listen. She'll make you realize that being a successful comedian takes hard work (you don't just show up to the microphone and start cashing paychecks), plus she gives some behind-the-scenes scoop on her experiences in Hollywood.

Loved all of it.

I loved this audiobook, I think I enjoyed it way more than I would have a written book considering it was read by Kathy herself. She put so much expression into her reading it really felt like one of her stand up CDs, even in the saddest moments of her life.

I was so interested the entire time, I was sad to see the book end so quickly (I listened to four hours in my first sitting, and finished it in my second) because I was so interested in hearing about her life. Yes, a decent portion of the book was already revealed in interviews/stand up specials, but she had much more time to work with and didn't spare any details.

Must have for any Kathy fan. I'd even suggest it if you've already read her printed book.

A great story about how Kathy who wasn't handed anything in life fought her way to get what she wanted. She doesn't shy away from sensitive topics.

This version is even better than the (paper) book!

What did you love best about Official Book Club Selection?

I read the paper version of this book first, then bought the audiobook. The audiobook was actually MUCH better and somehow, seemed different/funnier to me. I love her upfront approach to dealing with things - both good and bad.

What other book might you compare Official Book Club Selection to and why?

Wow, tough to say. Kathy is a category unto herself!

Have you listened to any of Kathy Griffin’s other performances before? How does this one compare?

Actually, it is as good as one of her performances. It sounds as if Kathy is actually talking to you!

I would let Kathy come up with one herself

Loved it. This book is not a must-read, it's a must-listen. It felt like Kathy was in my living room drinking coffee with me while telling stories about her life. She's candid, open and incredibly entertaining. I couldn't stop listening.

WOW !!! Was that ever fun. Someone else wrote in their review that it was like having a casual conversation with her, and that's exactly right. Funny of course, but also touching, and, you realize she IS the hardest working woman in show business. Loved every minute of it.
Write another one Kathy !!!!

Any Kathy Griffin fan would enjoy this book. Its 6 hours of storytelling from the author. She's funny and has some great stories. Highly recommended.

Kathy Griffin is a storyteller first, and perhaps a writer second. It makes sense then that this book is best enjoyed when told by the author herself. The phrasing of the book--which otherwise reads like a precocious 6th grader's diary entries--then comes to life with her trademark cadence and emphasis. This audiobook captures the frank, shameless and sincere observations she has about her family, her industry, her relationships.