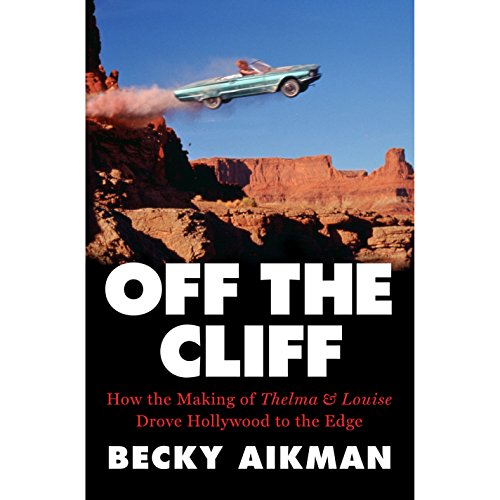 By: Becky Aikman
Narrated by: Kirsten Potter
Try for $0.00

"You've always been crazy," says Louise to Thelma, shortly after she locks a police officer in the trunk of his car. "This is just the first chance you've had to express yourself."

In 1991, Thelma & Louise, the story of two outlaw women on the run from their disenchanted lives, was a revelation. Suddenly, a film in which women were, in every sense, behind the wheel. It turned the tables on Hollywood, instantly becoming a classic, and continues to electrify audiences as a cultural statement of defiance. But if the film's place in history now seems certain, at the time its creation was a long shot. Only through sheer hard work and more than a little good luck did the script end up in the hands of the brilliant English filmmaker Ridley Scott, who saw its huge potential. With Scott onboard, a team willing to challenge the odds came together - including the stars Geena Davis and Susan Sarandon and a fresh-faced up-and-coming actor named Brad Pitt, as well as legends like actor Harvey Keitel, composer Hans Zimmer, and old-school studio chief Alan Ladd Jr. - to create one of the most controversial movies of all time.

But before icons like Davis and Sarandon got involved, Thelma & Louise was just an idea in the head of Callie Khouri, a 30-year-old music video production manager who was fed up with working behind the scenes on sleazy sets. At four a.m. one night, sitting in her car outside the ramshackle bungalow in Santa Monica that she shared with two friends, she had a vision: two women on a crime spree, fleeing their dull and tedious lives - lives like hers - in search of a freedom they had never before been able to realize. But in the late 1980s, Hollywood was dominated by men, both on the screen and behind the scenes. The likelihood of a script by an unheard-of screenwriter starring two women in lead roles actually getting made was remote. But Khouri had one thing going for her - she was so inexperienced she didn't really know she would be attempting the nigh impossible.

In Off the Cliff, Becky Aikman tells the full extraordinary story behind this feminist sensation, which crashed through barricades and upended convention. Drawing on 130 exclusive interviews with the key players from this remarkable cast of actors, writers, and filmmakers, Aikman tells an inspiring and important underdog story about creativity, the magic of cinema, and the unjust obstacles that women in Hollywood continue to face to this day.

What listeners say about Off the Cliff

Loved this book. I read a lot of “making of” books, and this one is among the best. Great detail about the filmmaking process and the studio politics involved in getting movies made. Very smart and incisive insights into the cultural impact this movie made. Highly recommend.

History you are there for.

For those of us past a certain age, we remember the rage Thelma & Louise caused. It was a laugh riot, a female-driven vehicle (in more ways than one), and a historical feat to get made.

It is absolutely fantastic to finally hear, from the people that were there, the stories of the making of the film, its impact, and what some learned from it. (YES, women CAN be the center of a film and YES it will make money... and entertainment to boot!).

Highly recommended for: Thelma & Louise Fans, fans of film history as told by those who actually made it instead of those who watch it and render an armchair evaluation.