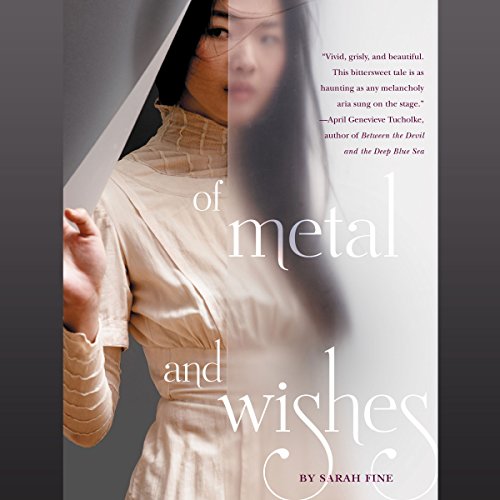 Of Metal and Wishes

By: Sarah Fine
Narrated by: Alexandra Bailey
Try for $0.00

This love story for the ages, set in a reimagined industrial Asia, is a little dark, a bit breathless, and completely compelling.

Sixteen-year-old Wen assists her father in his medical clinic, housed in a slaughterhouse staffed by the Noor, men hired as cheap factory labor. Wen often hears the whisper of a ghost in the slaughterhouse, a ghost who grants wishes to those who need them most. And after one of the Noor humiliates Wen, the ghost grants an impulsive wish of hers - brutally.

Guilt-ridden, Wen befriends the Noor, including the outspoken leader, a young man named Melik. At the same time, she is lured by the mystery of the ghost. As deadly accidents fuel tensions within the factory, Wen is torn between her growing feelings for Melik, who is enraged at the sadistic factory bosses and the prejudice faced by his people at the hand of Wen's, and her need to appease the ghost, who is determined to protect her against any threat - real or imagined. Will she determine whom to trust before the factory explodes, taking her down with it?

What listeners say about Of Metal and Wishes

I loved this book. It had me totally entranced from the start. The whole thing was basically set in a slaughterhouse and it was kind of gory for the most part but it was also beautiful on so many levels. The time period was hard to distinguish and it was supposed to be set in an Asia-like place but that part wasn't well described. The slaughterhouse setting was better built up. I loved the relationships between the characters. The main character Wen and her father had such a delicate relationship. Then there was the relationship between Wen and the Noors, the low paid factory workers, which was incredibly sensitive. It started so full of fear and tension and changed to something very different, especially with Melik. Also both Wen and her father's relationship with Bo was so fragile and intense. All of these each needed such special care and attention from Wen and they got none from others in the slaughterhouse.
The book was really well written and the audiobook was amazing. The narrator really did an awesome job depicting Wen's character. Overall I was super happy with this book and can't believe I took so long to get around to reading it.

the narrator was awesome. This is a great story. I loved it, and so will others that read it.

Liked it but not near enough

I liked this book but I didn't like it enough, if that makes sense? First of all, it was surprisingly gruesome. I usually don't mind that but even I was taken aback at times: it was depressingly gory, severed limbs, messed up insides and all that. Sarah Fine painted a very dark atmosphere of non-stop graft without hope for betterment. I swear, it was almost dystopian!


Secondly, I didn't realise this was a historical fantasy until half way into the book and kept trying to guess time periods and areas and getting confused. The racism and lechery was very, very rampant in a society of extremely hypocritical views on women's place in it. As a result there was a lot of slut-shaming. The heroine did it, her friends did ti, and everyone else was very happy to do it too. I was frustrated and tired f hearing it.


Third issue was the instalove between Wen and Melik. I found it really hard to digest. She starts comparing the Noor to animals and within couple of weeks it's all moony eyes and dramatic proclamations. *eye roll*


At last, the narrator herself did not suit the book in my opinion. Alexandra Bailey sounded distinctly Caucasian and I couldn't get over that as in my head the voice didn't match my image of Wen.


Saying all that, this was a very Gothic, strangely compelling tale, and I enjoyed Ghost's character the most. He had layers, he had development, and I only hope to read more about him in the next book. Also, the atmosphere of the gruesome factory was a fantastic background. I'll be listening to the next book, because Of Metal and Wishes left me curious, even if I wasn't sold on the love story.