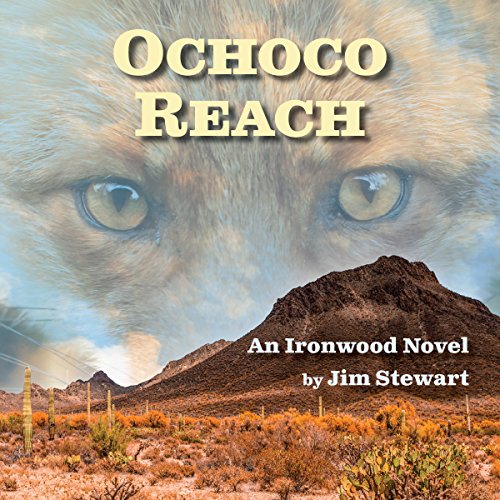 By: Jim Stewart
Narrated by: Colin Iago McCarthy
Free with a 30-day trial

Mike's usual strategy was to gently stir the pot and wait for patterns to emerge, but this case was boiling over from the day Willimina showed up at his office. Freelance investigator Mike Ironwood doesn't hesitate for a moment when a lovely stranger asks him to help her get to the bottom of suspicious happenings on her family cattle ranch. The case is intriguing, and Willimina even more so. Six days in, the case has turned up two dead bodies, an alphabet soup of secretive federal investigators, and a client who just might be The One. That's when things get complicated.

When a greedy DEA agent and his complicated and deadly triggerman kidnap Willy, Mike enlists help from his brother and sets out to rescue her from a conflicted cartel jefe. The trail leads them deep into Mexico, but they come home with dangerous unfinished business. Ochoco Reach introduces Mike Ironwood, his special ops brother Daniel, and Bucket, a Catahoula leopard dog who is equally at home herding cattle and pinning bad guys to the floor. Together, they are formidable allies who also seem to attract trouble at every turn.

What listeners say about Ochoco Reach

Private eye Mike Ironwood has a formula when it comes to solving cases that come his way. That all goes flying out the window when Willimina (Willy) comes to him for help when mysterious things start happening at her ranch.

It’s going to take help from his special ops half-brother Daniel, Willy, who he immediately and happily falls for and his trusty dog Bucket, once Mike gets sucked into this dangerous rabbit hole!

I absolutely loved this story, action, adventure, suspense and romance, and enough American colloquialisms that I’ll have my hubby sighing with exasperation when I start whipping them out at random times!

Jim Stewart has a unique way of storytelling, I found his prose at times so beautiful and always engaging. Colin Iago McCarthy did a wonderful job narrating, it’s the first audiobook that I’ve listened to from him, but this style of writing suits his voice to perfection. The audio production was flawless.

will keep you on the edge of your seat

Mike Ironwood is a complex guy who never plans ahead but rather flies by the seat of his pants.  Ex-military and one who dislikes authority, Mike finds himself with a new client – Willimina.  Willy seeks Mike’s expertise as she feels something on her farm is out-of-place and she feels watched.  Together, the two of them find themselves embroiled in a mystery involving the Mexican Drug Cartel, various covert federal government agencies and more.  Mike, together with his equally deadly special ops brother, Daniel and his loyal Catahoula leopard dog, Bucket, go toe-to-toe with the bad guys.

Bullets flying, fists pounding and a host of who’s who in this thrilling suspense novel that races from page 1 through to the end.  Jim Stewart does an excellent job of building each character, making the dialog realistic and keeping the story flowing smoothly even at a fast pace.  I loved how Mike Ironwood was a fly by the seat type of guy but it was clear he was a fast thinker, a mover and shaker who could read people and situations accurately.

While this is not truly a western, there are damsels in distress, a cowgirl, a couple of Indians and a ranch.  This book is mainly a suspense thriller that will keep you on the edge of your seat.  Over nine hours in length, I listened to this book in almost one sitting!  I could not shut it off.

Colin Iago McCarthy did an excellent job as narrator.  His voice was soothing even through the excitement, his voice was polished and reflected each character well.  He spoke clearly and with depth.

There were no issues with the audio quality of this production.

I enjoyed this audiobook and would recommend it to anyone who enjoys a good mystery and action packed suspense.

Author Jim Stewart writes thrillers like a pro, but as far as I can determine this is his first. The characters are vivid and character development is brilliant. The plot held my strong interest throughout. The story is set in eastern Oregon and the California border portion of Mexico. Narration is superb.