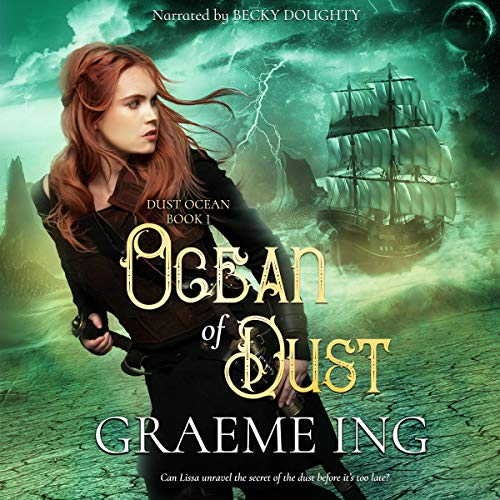 By: Graeme Ing
Narrated by: Becky Doughty
Try for $0.00

Fourteen-year old Lissa is snatched from her home and finds herself a slave on a trading ship traveling on a waterless ocean of nothing but gray dust. A feisty, curious and intelligent girl, her desire to explore the ship earns her the hatred of the cruel first officer, Farq.

Fascinated by the ocean of dust, Lissa becomes embroiled in its mysteries, sensing things that the crew cannot, while cryptic whispers in her head are leading her toward a destiny linked to the dust itself. Only one man aboard can help her make sense of her new talent, but can she trust him? All is not as it seems, and she must unravel the clues before it's too late.

When a sinister plot casts her adrift on the barren ocean, her best friend is left in the hands of the treacherous crew. Everything hinges upon her courage, quick wits, and her ability to master her new talent.

What listeners say about Ocean of Dust

Ocean of Dust by Graeme Ing
Genre: Secular YA sci-fi/fantasy. "Gods" are mentioned

Fourteen-year old Lissa, Lyndon and Pete are snatched from her hometown to be made slaves on a trade ship. This no ordinary ship, nor is the ocean ordinary. It's waterless, made of nothing but gray dust. Currents of dust are grabbed by an object on chains below the ship to propel them along. It takes a special person to chart and "feel" these currents. And what no one knows, not even Lissa herself, is that she is gifted in it all, and can communicate telepathically with the creatures that live in this dust ocean.

Lissa is clever, curious and intelligent, with a big heart. Except for two young people, the physicker and a navigation teacher, not a single person on this ship treats her with anything other than disdain. Slapping her, calling her names, shoving her into or down any hole or flights of steps, and ordering her to do every menial task is her daily life onboard. Primarily she assists the cook who is brusque and nearly as hateful as the rest of the crew. (I've never read a book with such a horrible group of miserable people in my life).

As much as she misses her family she doesn’t seem to want to go back...like something is calling her to travel. She wants to explore the ship and learn all she can.

No matter what Lissa does though, no matter how compliant, it earns her only hatred from the cruel first officer, Farq, who seems to blame her for everything, punishing her constantly. Lissa lives in perpetual fear of the crew and two other abducted teens, Lyndon, an uppity spoiled rich kid, and Alice who is never anything but cruel. Lissa is so sweet and apologetic for everything, but it seems the nature of the crew is hateful.

Sounds pretty awful, doesn’t it? To be honest, I’m not sure I’d want my pre-teen reading this. A pre-read by parents for their teens might be considered as some bizarre language is also used.

But the imagination and storytelling of this author is like nothing I've ever read. Clearly written for a younger set, it is nonetheless engaging, and the reader is constantly hopeful for a better outcome throughout the book. Oh, it comes, but it is hard won. Many adventures, and explorations of new lands and new creatures.

The story could have used less cruelty and a few more sympathetic characters, in my opinion. Worth the read? There's definitely a fan base for this sort of book, so I'll give it a plus for that. But will I read another book if the story continues? Nope. Too much stress for me. All the way through I kept saying to myself, “What more can happen to this poor child?”

If I may, though, this was an audiobook given to me by a different author and by Audible.com, and the narrator was incredible. Becky Doughty does accents, voices and emotion to perfection. I know it’s cliche to say, "I felt like I was there", but in this case, I cannot find another way to say what went on in my mind while listening to this. To me, her narration really made this book! Great job!

The cover is definitely intriguing and I like her eyes and the sky especially :)

My son and I have been listening to audiobooks on the ipod I won over the summer since school started, and this is one of the audiobooks that I won with that ipod. I wasn’t sure what to expect when we started listening to this book since I didn’t look at the blurb prior to listening; I just knew it was YA and therefore okay to listen to with my son :)

Graeme has an amazing imagination to come up with a world like this where sailing on an ocean of dust can happen. I especially like how Lissa comes from a place more like our world with sailing, so we get her reactions and impressions to help us see what is going on. The descriptions and storyline was awesome, and I really can’t wait for more in this series. And according to his website, there is more coming which will make my son extremely happy because even he wants more, and he is harder to please :)

Lissa is such a strong and curious girl. I don’t know if I could be as brave as her given her kidnapping and subsequent troubles. She exhibits all the characteristics I would want my son to with being kind, loyal, and courageous. I’m annoyed with some of the characters thinking that because Lissa is a girl she is useless and can’t be intelligent. Thankfully, most of them redeemed themselves in the end for the most part. I really want to see what happens in Lissa’s next adventure with Branda.

I recommend this book to any adventure lovin’ soul from middle schooler to adult :)


Ocean of Dust is a tale that follows a young girl in another world named Lissa. She is kidnapped and forced to work as a galley girl aboard a ship sailing across an ocean made of dust. She is mistreated and disrespected most of the time, but she eventually realizes she has a magical connection to the ocean.

Lissa has an insatiable curiosity and often puts her nose where it doesn't belong, bringing her no end of trouble. She does learn some secrets that threaten the crew, but she doesn't act on them quick enough to make any difference. While the book tells us she has a perfect moral compass, she seems to lack wisdom or prudence. Thus, much of the violence and troubles she encounters were her own doing.

Speaking of violence, this book has no shortage of it. In fact, I would say it is over-the-top and completely overdone. Having Lissa endure round after round of beatings leads little to the story.

The plot was entertaining, though the action is mostly contained to the ship. There were quite a few slow parts that could have been removed with little impact on the story. However, I felt myself wanting to know what came next so the "page turner" factor is well there.

The world building was quite imaginative and interesting. I have certainly never read a story about an ocean made of dust, filled with magical creatures. We don't learn a whole lot about the various peoples of the world, or the lands, but what we do learn is enough to push the story forward.

The characters were also well developed and intriguing, though several were absolutely despicable. Unfortunately not all met an appropriate reckoning, but at least some justice was dealt out. Lissa grows well and learns to use her abilities to ultimately rescue the crew on several occasions.

I listened to the audiobook and felt the narrator did a good job. She had a good naive voice appropriate for Lissa, and did a fine job with the other voices as well.

Overall, this is an entertaining and imaginative story that follows the growth of Lissa and the ship's crew, but one that is dark and brutal with some unnecessary violence and some slow pacing. It is, however, a memorable experience that is worth trying.

NOTE: I received this book for free in exchange for an honest review.