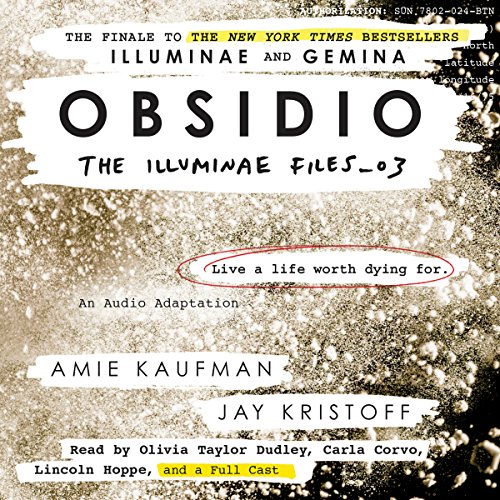 From best-selling author duo Amie Kaufman and Jay Kristoff comes the exciting finale in the trilogy that broke the mold and has been called "stylistically mesmerizing" and "out-of-this-world-awesome".

Kady, Ezra, Hanna, and Nik narrowly escaped with their lives from the attacks on Heimdall station and now find themselves crammed with 2,000 refugees on the container ship Mao. With the jump station destroyed and their resources scarce, the only option is to return to Kerenza - but who knows what they'll find seven months after the invasion?

Meanwhile, Kady's cousin, Asha, survived the initial BeiTech assault and has joined Kerenza's ragtag underground resistance. When Rhys - an old flame from Asha's past - reappears on Kerenza, the two find themselves on opposite sides of the conflict. With time running out, a final battle will be waged on land and in space, heroes will fall, and hearts will be broken.


Is there any better feeling in the world than discovering a new young adult book series to devour? Whether you're into epic fantasy, the supernatural, rom-coms, or a great mystery, there is definitely a YA book series out there for you. And in audio, there’s the added benefit of talented narrators bringing these stories to life in exciting ways. We've compiled 20 of the best completed and ongoing YA audiobook series out there and broken them down by genre.

What listeners say about Obsidio

Live a life worth dying for

The performance this cast gave was amazing. I only wish the individual characters had more opportunity to speak because all of them have such amazing performances, but then that would deprive me of the ever wonderful analyst 7213 0089 (whose true identity is finally revealed!), which would also be a tragedy. This book reminds us that everyone involved is there against their will. The survivors heading towards Kerenza never asked to be attacked, the survivors on Kerenza never asked to be occupied by an invading force, and even the invaders never signed up to occupy a hostile planet for 7 months. There are some great villains you love to hate, only to be reminded of their humanity at the least opportune moment. There is also just as much tragedy in this final installment as in the previous ones. This was a highly satisfying ending to a great series.

I don't think you'll find another audiobook like this one! The amount of work that clearly went into it to make it as real and immersive as possible is just amazing. I read the first two books, and honestly thought that it couldn't be done as an audiobook. But then I didn't have the time to finish the last one so I thought I'll try the audiobook while I work. It was so incredibly amazing! I couldn't stop listening to it!

Predictable... but still a great story

I enjoyed it a lot. Although you can guess where the story goes by the 3rd book, if you finished the first two, you may as well finish the series.

Should Not Have Been the Final Book

Allow me to start by proclaiming my love for this series. The Illuminae Files is one of the most fun and emotional series I have ever had the pleasure of reading. Nothing about this book truly disappoints me except for its length. I could not force myself to care for the two new characters introduced in this book as much as I care for the the other two duos. The other two got books almost entirely to themselves so the reader could learn who they were and care about them. I did care about and like them, but they felt out of place with the rest of the group at the end. This book is nearly evenly split between them and the older characters so we have less time with them and I feel like their plot was rushed.

This brings me to my main point. There should have been a fourth book with no new main characters introduced to wrap up everything, or at the very least an extra 100 or so pages in this book. There is a perfect fourth book location mentioned in the end of Obsidio. They rest for months on a farming planet but that is just a few lines. The wrap up should have taken place there, in my opinion.

All in all, I love his book and this series, I will mourn that it is over for years to come. My only wish is that there would have been four books instead of 3.

It’s a slow build to the end, but it was a good ending. It took longer to get through than the first few books because it just didn’t keep me as engaged as the others, but happy with the conclusion.

Am I Not Merciful?

I would recommend this book with this caveat. It is the conclusion of a story told in two superior novels. This novel is not near as engaging as the other two.

I thoroughly enjoyed and found myself absorbed during each of the reincarnations of AIDAN. It has served as fuel for my imagination in a way few things have.

The ending disappointed me. It could only have been more cliche if it had been set in an old widowed train car diner. the story is so well crafted until the ending scene. It took a lot away from he experience prior to this point.

I highly recommend the entire series If I could follow an alternative time line I would choose to put the book down once the verdict had been reached. Perhaps the me from moments before the end of the book has done just that and is content with the entire thing.

This was a good end to a pretty epic space adventure. Not my favorite of the three, but still really good. There were a few errors in the recording. Nothing super huge, just a few of the swear words weren't censored like they should have been, but nothing so bad it pulled me out of the story. It just happened more than it probably should.

Meant to be an Audio Book

This wrap up to the series was perfect. I couldn't sit through an audiobook before I got to this series. I could not have thought of a better way to wrap up a series. my only very small little problem with this book is the main character bubble makes it a little hard to get worried something might happen to the main characters in the book.

The Best Science Fiction space opera ever written and performed

I’ve listened to this trilogy four times, hearing every word, from cover to cover. I’ve never come close to doing that with any other work.

loved all the books on audible. the story and content were incredible, plus the characters and the plot lines.