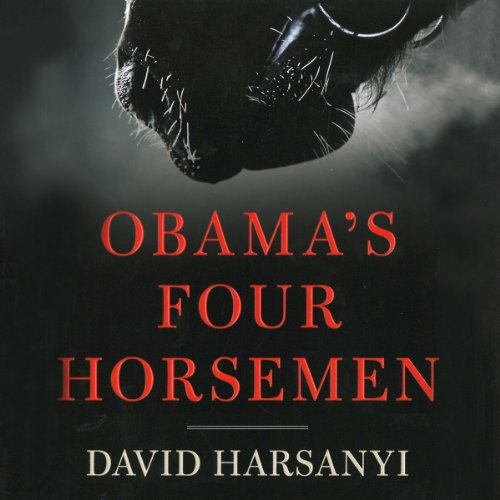 Conquest, Famine, War, Death: the four horsemen are coming, in the form of the national debt, widespread dependence on government, turmoil in the Middle East, and the expansion of the bureaucratic state.

In Obama’s Four Horsemen, syndicated columnist David Harsanyi takes a provocative look at how the Obama Administration allowed four big problems to mushroom into looming disasters we can no longer avoid or postpone. In his famous conversational, fact-driven, and humorous tone, Harsanyi argues that President Obama’s handling of both domestic and foreign crises has set the stage for a disaster of Biblical proportions.

Under Obama, America has become a land of more dependence, more hand-outs, more federal programs, and more government agencies. The great danger is that Americans have gotten used to it. Many people today expect, as a matter of fact, that the government will hand them health insurance, student loans, birth control, and anything else they might need or desire while they are increasingly numb to the pernicious creep of the bureaucratic state and the alarming escalation of unsustainable spending and debt.

Meanwhile, powerful forces abroad seek to destroy American and Western culture while Obama has sat on his thumbs and looked the other way, tossing out politically correct platitudes when asked about his response to their open threats and aggression.

America is facing a time of great upheaval, domestic and global. Obama’s Four Horseman is a provocative exposé on how we got here, and a chilling prediction of what’s to come.