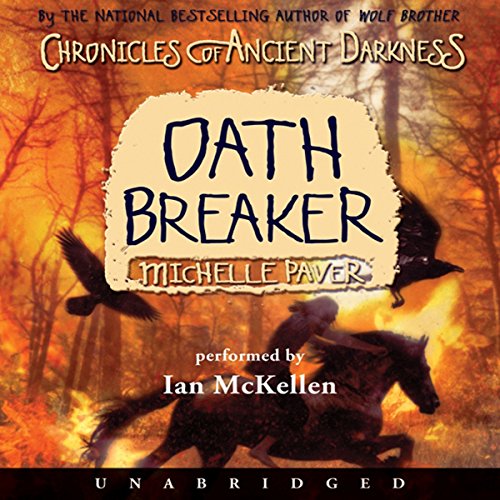 By: Michelle Paver
Narrated by: Ian McKellen
Try for $0.00

Torak circled the fire and Thiazzi came after him: slowly, cracking his whip, playing with his prey as a lynx plays with a lemming. Torak was exhausted. He wasn't going to last much longer. When he was outcast, Torak was the hunted one. Nine moons later he becomes the hunter, when he vows to avenge the killing of one of his closest friends.

Racked by guilt and grief, he follows the killer into the Deep Forest, where the World Spirit stalks the hidden valleys as a tall man with the antlers of a stag. But there is a rottenness at the heart of the Forest, for its clans have succumbed to the lies of the Soul-Eaters. Here Torak must face fire, war, and overwhelming evil. The fifth book in the Chronicles of Ancient Darkness series, Oath Breaker is a story about keeping promises and the true cost of vengeance.

What listeners say about Oath Breaker

Packed with emotional swings, the story requires close attention. It is not confusing, but you have to accept the beyond-normal abilities of Torak, especially his ability to read signs. This is one of those books whose cover and title only make sense after you have read it. At times I felt the orchestration of luck was a little over-much.

Yes! These books are incredible and it's really nice to hear Ian McKellen's interpretation.

Have you listened to any of Ian McKellen’s other performances before? How does this one compare?