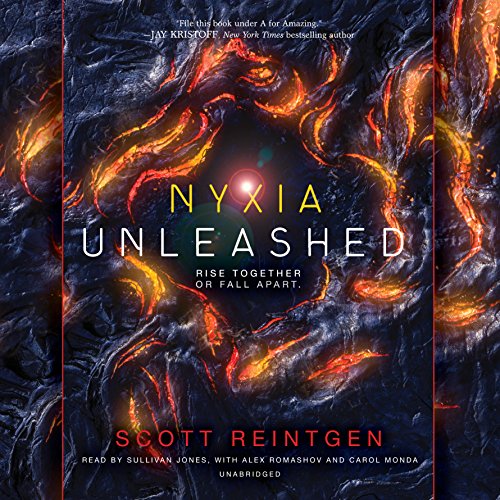 Discover book two in the sci-fi space trilogy that Bustle described as "The 100 meets Illuminae" and Marie Lu called "a high-octane thriller".

Emmett Atwater thought Babel's game sounded easy. Get points. Get paid. Go home. But it didn't take long for him to learn that Babel's competition was full of broken promises, none darker or more damaging than the last one.

Now Emmett and the rest of the Genesis spaceship survivors must rally and forge their own path through a new world. Their mission from Babel is simple: extract nyxia, the most valuable material in the universe, and play nice with the indigenous Adamite population.

But Emmett and the others quickly realize they are caught between two powerful forces - Babel and the Adamites - with clashing desires. Will the Genesis team make it out alive before it's too late?

Praise for book 1 in The Nyxia Triad:

"This is an amazing continuation of a solid first installment." (School Library Journal)

"The diverse characters are a refreshing aspect of this tale." (Kirkus)

"The series offers a great deal to YA science fiction, and readers will be anxiously looking forward to the next installment." (VOYA)

What listeners say about Nyxia Unleashed

strong recommendation for this book if you have kids 11 or so and older. parents loved it too! this is book 2 of 3

This sequel did not disappoint.

Sullivan Jones is an out of this world narrator. He such light and truth to Reintgen's timely words.

Great story with wonderful characters fully developed through their experiences. A story filled with joy heartbreak and hope which makes this sci-fi a lot like real life.

Nyxia Unleashed is an amazing sequel full of action and intrigue. The beginning was a little slow, but after that the plot gets going.

The story continues on planet!

Nyxia Unleashed
The Nyxia Triad, Book 2
By: Scott Reintgen
Narrated by: Sullivan Jones, Alex Romashov, Carol Monda
The story continues from book one, read book one first! The teens land on the planet to meet the aliens. Soon they find things aren't as they were told. They seem to be lied to by both Babel and the aliens. Things get very interesting! Loved it! Can't wait for the next book!
Great narration!

I thoroughly enjoyed this book. I listen when I work out and just get lost in this alien world. I struggle between wanting to keep listening because it’s so engaging versus wanting to stop so I can listen to it for as long as possible. I loved hearing how the characters develop and grow both as individuals and a unit. The scenes came to life in my mind as I followed Emmett, Morning, and the others on their journey through Eden. I’m really looking forward to the next book to see what happens to my favorite Genesis crew!

Just as good as book one!

Just as good as the first book. It really developes the characters and is fun from start to finish :)