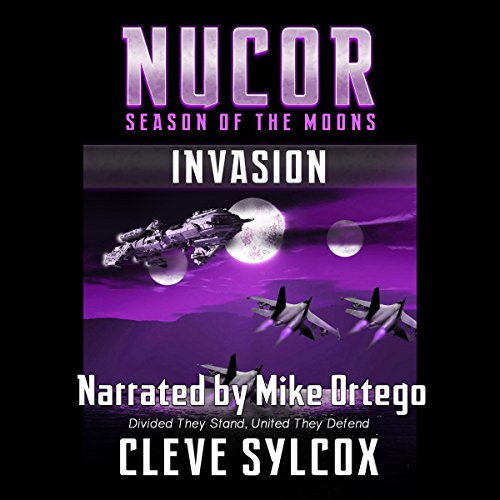 Nucor - Season of the Moons, Book One: Invasion

By: Cleve Sylcox
Narrated by: Michael Ortego
Try for $0.00

Nucor - a vast wasteland of ice and snow with a 600-mile belt of jungle around its equator. Its inhabitants consist of genetically modified humanoids set on killing one another until an army of lizards invades.

Thomas Hardwick, on the run from the law, finds himself caught in the middle and at the same time discovers his past and who he really is.

What listeners say about Nucor - Season of the Moons, Book One: Invasion

Professor Thomas Hardwick is a red P-cant, a humanoid capable of great strength and mental capacity.  Living by himself in the frozen waste-lands of the arctic world of Nucor, he just wants to do his scientific studies in peace.  The alien invaders and A-cants (warrior race of his own species) have other ideas for him, however, when they destroy his science station.  Soon he is on the run with his three companions: the station AI, the rover AI and the beautiful assassin who isn’t sure if she should bed him or kill him.

Thomas can’t remember much of his past, so when he discovers three keys, he is driven to find out more about himself.   It becomes clear to the listener, though not Thomas, that his friends might actually be his enemies, and his enemies his friends.  Thomas has the ability to “see” around himself, know about things that are happening in his near surroundings.  It gives him an advantage if it doesn’t overwhelm him.

There is plenty of action in the story, but there is also a lot of ground work being laid for a much broader tale.  The listener has a guess about how the various humanoids came to be, but very little about the Lizard race of invaders and their mind control agents.

It is an entertaining story with a lot of mysteries that are revealed in fits and starts.  Toward the end, the listener knows a lot, but very little about the aliens and their motivations.  There are a lot of humanoid and alien species to keep track of, but not impossibly so.  It is book one in a series after all.

Michael  Ortego is the narrator of the story and does an excellent job.  His deep voice is a pleasure to listen to and his character voices are clearly defined and easily discerned.   He has what one might describe as a classic audiobook voice.

Nucor – Invasion is an entertaining book with plenty of action and interesting characters.  The plot constantly redirects the listener, keeping us somewhat off balance.  It is not without its flaws or distractions (written in the present tense, which is somewhat confusing at times), but is enjoyable and will have the listener looking forward to the sequels.  Well worth a listen.