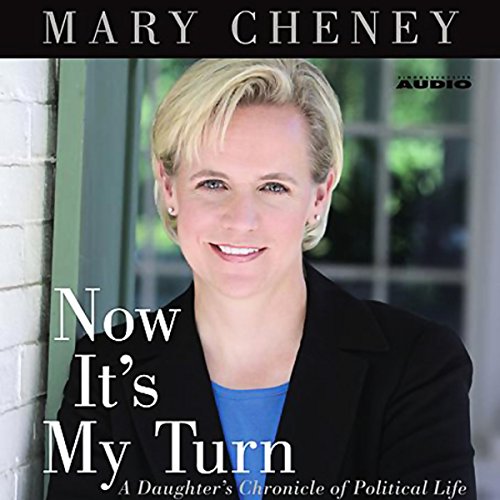 Now It's My Turn

Now It's My Turn

In the most eagerly awaited political memoir of the season, Mary Cheney presents a behind-the-scenes look at the high-intensity world of presidential politics and talks for the first time about her life, her family, her political views, and her role in the campaigns of 2000 and 2004.

As a senior adviser to her father, the vice president, she was in the middle of every major event of the 2000 and 2004 presidential contests, at the conventions, the debates, and on the trail. Both elections made history, and so did Mary. And for the first time ever, she writes about what it was like to be at the center of her father's campaigns as his daughter, as a member of the senior staff, and, though she never intended it, as a political target for the other side.

In her frank, funny, and down-to-earth memoir, Mary Cheney describes life inside the bubble of a national campaign. She talks about her close relationship with her parents, how it feels to be pursued by the press, and what it was like when John Edwards and John Kerry made her sexual orientation an issue in live debates televised to millions of Americans. As she describes it, life inside a presidential campaign can be uplifting, frustrating, and heartbreaking, but no matter what else it may be, it's always entertaining.

The title of this book might throw some readers off. Don't expect to any major revalations or insights into Mary Cheney's private life or her much publicized sexual preference. This book documents her life as the daughter of Dick Cheney. If you are interested in politics and campaigning you may enjoy this book. Mary Cheney is not an activist, preferring to work behind the scenes for other people, like her dad. The book documents the daily activities of a campaign, sometimes drudgery, sometimes thrilling, sometimes funny.

Lesbian Daughter Tells Her Side

Mary Cheney gives an honest and often engrossing account of her time working with her famous and very conservative father. Sometimes she had my sympathy and sometimes I couldn't contain my irritation at her choices. This book definitely benefits from being narrated by the author. Overall I found this book informative and enjoyable.