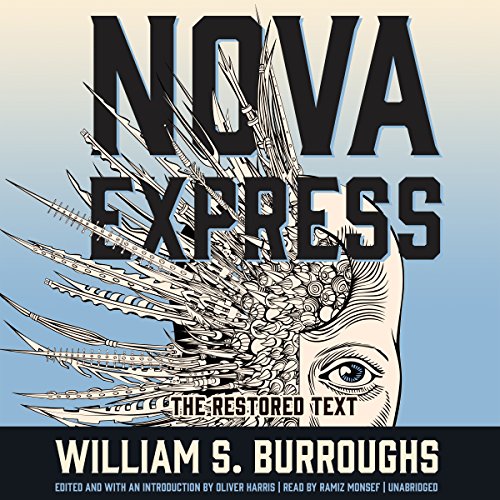 By: William S. Burroughs
Narrated by: Ramiz Monsef
Try for $0.00

The third and final installment in Burroughs' Nova trilogy, this surrealist novel is part-sci-fi, part-Swiftian parody, and pure Burroughs.

The Soft Machine introduced us to the conditions of a universe where endemic lusts of the mind and body pray upon men, hook them, and turn them into beasts. Nova Express takes William S. Burroughs' nightmarish futuristic tale one step further. The diabolical Nova Criminals - Sammy the Butcher, Green Tony, Iron Claws, the Brown Artist, Jacky Blue Note, and Izzy the Push, to name only a few - have gained control and plan on wreaking untold destruction. It's up to Inspector Lee of the Nova Police to attack and dismantle the word and imagery machine of these "control addicts" before it's too late.

What listeners say about Nova Express: The Restored Text

&quot;What scared you all into time? Into body? Into sh!t? I will tell you: &quot;the word.&quot;
- William S. Burroughs, Nova Express

Writing about the Nova Trilogy is frustrating.
It feels...
a bit...
like reviewing Joyce's Finnegans Wake.

At 3:00, now 4, am it is hard to really, REALLY, get to the meat and idahosoftbones of it all. The books (all 3) are so damn knotty and naughty. Now, I'm not even REALLY comparing the Nova Trilogy to Finnegans Wake. No. They are two different beasts in scale, complexity, method, etc. I only bring them together, briefly, HERE to compare because, for me (reader), they hit me (reader) hard with their experimentalism and dark, almost ugly, UGLY, opacity. They aren't meant to be understood as much as they are intended to be experienced. They were both written to flickerclusterf#&amp;% with the reader (me). Yes. Mission Accomplished.

One of the other difficulties with the &quot;Nova Trilogy&quot; is the VERY concept of these 3 books being an actual trilogy, or defining WHAT exactly the Nova3 was. The novels that are NOW generally considered to be part of the trilogy were writen in an order that is different than the order they were eventually published. Many of the novels in the Nova3 were REVISED and some revised again, so knowing what version of the cut-up novel is part of the Nova3 becomes, within the overall word horde, a bit dicey. Add to that--both The Wild Boys and Naked Lunch were considered at one poin to be part of Nova3 makes defining/containing things even more fragmented and confusing.

But please, don't let that daunt you. I'm not sure multiple versions of the novels, and the swirling versions of the trilogy were ever INTENDED to not confuse; Burroughs WAS ever and mutliple always breaking and rebuilding forms. He was cutting and re-cutting constantly. So, the idea of a living, breathing Nova3 is part of the whole word horde experiment. Go with it. Grab a version. Grab one of the 3. Hell grab one of the 5. Read it. Read another. Don't get too stuck on whether you are reading the &quot;right&quot; version, or reading the novels in the right order. Relax. Drink something. Smoke something. Pop something. Enjoy?

Of the three books that make up the currently accepted Nova3 (1. The Soft Machine, 2. The Ticket That Exploded, 3. Nova Express) Nova Express is the by far easiest to read, the least offensive, but also my least favorite. And NOT really because it was easist to read and stomach. Perhaps, I was just weary of the whole word horde world, or gassed out, or even a bit [gasp] bored. Nova Express just didn't bend me over like SM &amp; TTTE both did. It was a soft landing, a walking last lap, a migraine bruise. But still, together, these three novels are hard to shake off. They are rash and a rush and infection and a cure, a nightmare and a VERY strange trip. They are, together, a literary cold sore that won't go away.

If you could sum up Nova Express: The Restored Text in three words, what would they be?

What is this book? an experimental Sci-fi? the disturbing murmurs of some who took too much? a post-modern dystopia? the book that first predicted the Internet? yes. yes. yes. and... Yes!

Thankfully, the last one

Nova Express is the 3rd installment of William S Burroughs Nova trilogy also known as the 'cut-up' trilogy. The basic premise is that the Nova Mob is exerting mind on humanity, while Inspector Lee is battling the mob. Defense against the mind control come sin the form of mash-ups of language, images, and music, etc. The main thread is hard to follow as Burroughs intersperses the main text with both experimental literature techniques as well as long digressions of pseudo-scientific explanation of his orientation towards society and his fondness for drug use.

While the basic plot is extremely convoluted, Burroughs attempts to relate commentary on culture where his writing and writing style attempt to deconstruct society in a manner similar to Timothy Leary's approach with drug use. At the same time, He employs experimental literature techniques such as 'cut-up' and 'fold-in' where text is simply jumbled and then reassembled and edited for supposedly insightful revelations. He also spends much time describing doing similar things with spoken words to derive new power and abilities. There are also numerous cultural references that may be obscure to a younger audience.

The narration is clearly the best part of the series.

Note: As with the other installments, there is roughly an hour introduction by the editor of this version, the 'restored; text. While this work was clearly the 3rd installment, the other two books in the trilogy underwent massive rewrites after publication of Nova Express that require some explanation.

A good intro to sci-fi horror cut up poetry

More accessible than naked lunch. A manifesto on media manipulation disguised as a science fiction novel. Dada poetry with a narrative that cuts deep into the American psychiatric prison game show culture. A manual of arms for devolutionist gorilla forces, and a cracking futurist pornographic Sunday comic for all.

Burroughs was brilliant. This book is not as explicit as most of his other early work. Being less explicit makes if better to my tastes. But, it is wonderful, dark Sci fi Burroughs. I enjoy it and the voice talent adds to the experience.

a brilliantly cacophony of all voices

The best way to explode

No good... no bueno... , is one of the more common refrains throughout the Nova Trilogy, the Cut Up Trilogy, the trilogy of trilogies ~ very good, muy bueno... the best way to explore Burroughs work and explode your audiobook mind. In the flow of speech is where Burroughs work lives, and expands, glitching and glittering in filthy and flowing, cutting, connecting, cutting. These three audiobooks are an amazing way to immerse your mind in Burroughs world and work, and immersion is essential. Highly recommended.