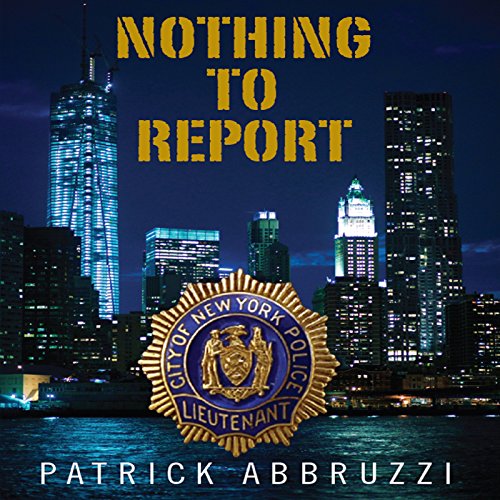 Nothing to Report is an audiobook about Police Patrol in New York City during the turbulent eras of the 1960s, 1970s, and 1980s. Although a novel of fiction, it is based upon real incidents that occurred during that time period. Actual locales in Manhattan, Brooklyn, and Staten Island are utilized.

The audiobook contains love, death, passion, violence, and is interspersed throughout with history of the time period. It centers around two main characters who work together in the 120th police precinct.

The prominent character is Lieutenant A. and his driver Charlie. During their times together, Lt. A goes back into his past and describes for Charlie some of the most horrific incidents that he had encountered when he was a young officer during the 1960s and 1970s.

The stories that Lt. A recounts for him help take Charlie's mind off his pressing problems with his ongoing affair. The pressure of the affair begins to have a negative effect on Charlie, especially after his wife finds out and, she too, begins an affair in the office where she works.

Charlie finally realizes that he does not want to lose his wife and finally confesses everything to Lt. A, who comes up with a solution that just might help Charlie with his problem.

What listeners say about Nothing to Report

Where does Nothing to Report rank among all the audiobooks you’ve listened to so far?

One of the best... Very memorable.

Father Krackowski... Touched me in sort of a personal way.

What about A.T. "Al" Benelli’s performance did you like?

The voices, accents and "special effects"... like the police radio... were very professional and very entertaining.

If you could rename Nothing to Report, what would you call it?

Pulls a lot of emotional strings... funny, sad, fearful, sexy, tragic, historical, angry... it's all in there somewhere.