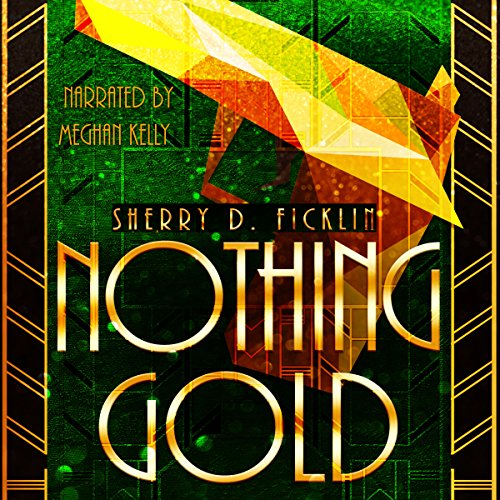 By: Sherry D. Ficklin
Narrated by: Meghan Kelly
Free with a 30-day trial

Dickey has been down on his luck since the day he was born. Flat broke and sick of being looked down on, he meets young socialite Lilly Rose at a wild party. The connection is like a strike of lightning. From a wealthy New York family, this debutante is everything he's been told he can never have - and the only thing he wants. Determined to win her, he knows the only way to get her parents approval is with cold hard cash. So when a shot at the biggest score of his life comes around, he just can't refuse.

Nothing Gold is the third installment of the Canary Club Story Collection. Set during the flamboyant anything-goes era of 1920s America, these short stories are filled with intriguing characters and rich imagery from the time period - with romance, flappers, jazz music, gangsters, and lavish wealth.

What listeners say about Nothing Gold

Last in Mini-Series in Anticipation of Canary Club

Nothing Gold is the last in a three-part mini-series to introduce Sherry Ficklin’s new series called The Canary Club, which is expected to be released in October. Although I preferred the first story better, The Gilded Cage, this story is still an entertaining glimpse into the early 1920’s prohibition era. I can see why those who were reared during this era are called the "Lost Generation" where speakeasies and gangsters run rampant with headstrong young women and wandering young men.

Nothing Gold introduces us to Dickey, Benny, and Lilly. Dickey is basically a kind and romantic young man who is down on his luck. He believes that if he can execute one last big score, he can break away from a life of crime and start over. When he sneaks into a well-known socialite's party to steal some riches, he meets Lilly who encourages him to take everything and then some more. Ultimately we find out that Lily has ulterior motives and she blackmails Dickey into doing something terrible. He then goes to his best friend and guardian angel Benny for advice, and Dickey is persuaded into telling the truth. The story ends with us wondering whatever happened to Benny and how could Benny make such an unselfish sacrifice for Dickey? I’m sure we’ll get those answers in The Canary Club, which, thankfully, is devoted to telling Benny's story. October can't get here fast enough!

I listened to the Audible version of The Gilded Cage narrated by Meghan Kelly who did an outstanding job as she always does. Her narration flows naturally and she is easy to listen to, providing subtle character nuances for each voice. I've bumped up my 3.5 starred rating due to her performance alone and I'm really looking forward to listening to Meghan's next book!

Surprised Dixie story is told in book three and not in two as he is mentioned in two? Anyway liked this one better then two as the narrator even tho the same person did a much better job with the characters. Still too short and too many loose ends left hanging. Leaves you wondering why not just make this a bigger book then a short? Received this book at no charge in exchange for an honest review.