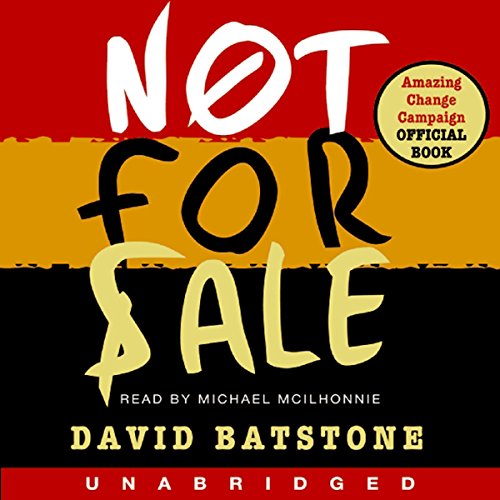 The Return of the Global Slave Trade - and How We Can Fight It
By: David Batstone
Narrated by: Michael McIlhonnie
Length: 9 hrs and 22 mins
Categories: Politics & Social Sciences, Politics & Government
4.5 out of 5 stars 4.3 (30 ratings)

By: David Batstone
Narrated by: Michael McIlhonnie
Free with a 30-day trial

Award-winning journalist David Batstone reveals the story of a new generation of 21st-century abolitionists and their heroic campaign to put an end to human bondage.

In his accessible and inspiring book, Batstone carefully weaves the narratives of activists and those in bondage in a way that not only raises awareness of the modern-day slave trade, but also serves as a call to action.

With the recent 200th anniversary of the climax of the 19th-century abolitionist movement, the world has paid tribute to great visionary figures such as William Wilberforce of the United Kingdom and American Frederick Douglass for their remarkable strides toward framing slavery as a moral issue that people of good conscience could not tolerate.

But slavery and bondage still persist in the 21st century. An estimated 27 million people around the globe suffer in situations of forced labor and commercial sexual exploitation from which they cannot free themselves. Trafficking in people has become increasingly transnational in scope and highly lucrative. After illegal drug sales and arms trafficking, human trafficking is today the third most profitable criminal activity in the world, generating $31 billion annually. And as many as half of all those trafficked worldwide for sex and domestic slavery are children under 18 years of age.

"Batstone exposes the alarming rise of one of the great moral crises of the day, human slavery. His well-written accounts of victims and survivors will inspire you to join the growing twenty-first century abolitionist movement." (John Miller, former director of the U.S. State Department's Office to Monitor and Combat Trafficking in Persons)

What listeners say about Not for Sale

Just when you thought it was safe to come out of the house, David Batstone writes a much needed book titled "Not for Sale." In this book he exposes the current status of trafficking in women and children and slavery in contemporary society. He contends that about 27 million people around the world suffer from forced labor and sexual exploitation. Even if we don't accept these high figures, his book is still troubling and worthy of every thoughtful listener to Audible books.

About the first half of the book tells the stories of women and children trapped in forced labor. Those sections are a little repetitive, but the force of the situation is so important you will overlook this fact. The second half deals with similar issues as encountered in Latin America and under the Russian mofia. His accounts of victims and survivors will disturb the reader as they should.

I would recommend that two other books be read along with this particular title namely "Gomorrah" by Roberto Saviano and "The Accountant's Story" by Roberto Escobar. Both are available from Audible. The first deals with international criminal activity in Naples and the second the drug cartel. The crime trilogy pretty much introduces international crime to the reader. Of the three "Gomorrah" is the most exciting to read, "The Accountant's Story" is the most amazing to read and "Not for Sale" the most heart rending. "Gomorrah" touches on slave labor as defined by Batstone tangentially.

All are well written and read.

The narration is good, the research seems good, but the writing is extremely poor. One example from 47:59: "The distribution of wealth is not being evenly distributed." (This sentence should of course read "Wealth is not evenly distributed) Gaffes of this sort heavily pepper the book, as do the sort of awkward phrasing and unprofessional style you'd expect from the average high school student term paper.

The stories intertwined with the informative information made it so captivating and real.

This book is for the informed or uninformed on the subject of human trafficking. Hopefully, it will open your eyes and heart towards these boys and girls, men and women, like it did mine.