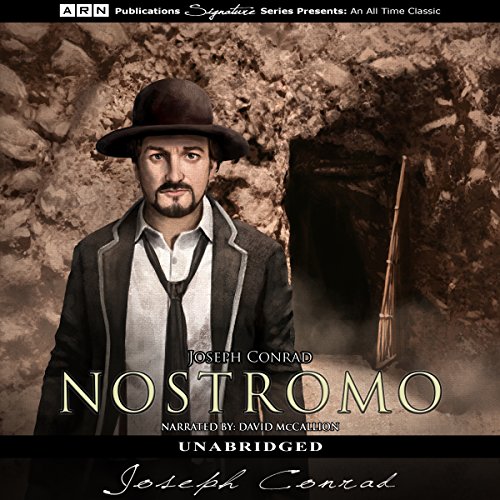 By: Joseph Conrad
Narrated by: David McCallion
Try for $0.00

Nostromo is a colorful and adventurous tale set in the fictional South American country of Costaguana. In the midst of a revolution, the citizens of Costaguana live under a brutal dictatorship of Ribiera, a ruthless leader kept in power through foreigners and their dark money.

The oligarch government has become so corrupt that the citizens of Costaguana have had enough. In fear of losing his wealth, Charles Gould, the leader of a wealthy family, asks Nostromo for help in getting his vast silver fortune out of the city. Their plan goes awry, and Nostromo claims the fortune was lost at sea.

Originally published in 1904, Nostromo is considered to be Joseph Conrad's finest work for its many classic themes, including honor, duty, and the eternal war between good and evil. Although published at the beginning of the 20th century, the theme of this novel closely aligns with what many nations face in the modern world.

What listeners say about Nostromo

Narrator thrusts listener from the narrative

The great story and work of Conrad is not done justice by narrator horrid pronunciation of Spanish, Italian and French words. The narrator makes the listener lose the nuisances and exquisite choice of words used by the author to bring the reader:listener into the landscape and context of Latin America that Conrad picked up. It is a shame the region’s best narrative written by a non-Latin American is lost in this rendition
Re-record and use someone that can bring forth the great landscape Conrad intended

I can't believe a production of this magnitud cannot find a person to properly coach the narrator in foreign languages.

The language in this book

I love the language in this book. Conrad at its very best. Loved it 100%