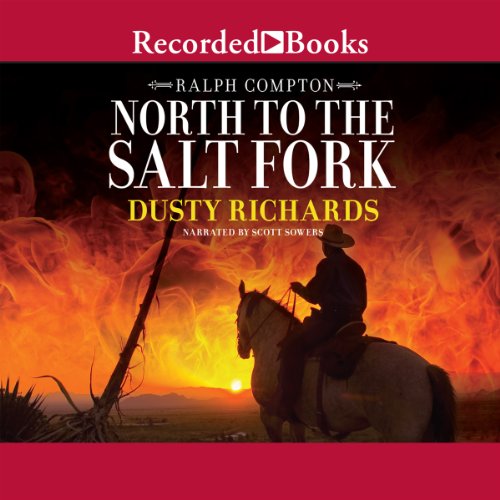 North to the Salt Fork

By: Ralph Compton,Dusty Richards
Narrated by: Scott Sowers
Try for $0.00

Captain Jack Starr served the Confederate cause with honor for four years. The town of Lost Dog Creek promised an opportunity for the war veteran to rebuild his life-and a woman to share it with. But not everyone is willing to roll out the welcome wagon....

What listeners say about North to the Salt Fork

Mr. Compton's story was excellent. Had I read it as a book and not listened to it, I would have been much more satisfied.
Sadly, it was painful to endure Scott Sowers' narration of a finely written western story. His inflection and pauses were ill-timed. It often reminded me of a young child reading a story which it did not understand. I will look for more of Mr. Compton's work on Audible but will never again listen to an audiobook narrated by Scott Sowers.

Would you try another book from Ralph Compton and Dusty Richards and/or Scott Sowers?

I would certainly buy another book by Ralph Compton and Dusty Richards. I would not buy any book narrated by Scott Sowers.

What was most disappointing about Ralph Compton and Dusty Richards ’s story?

Because of the poor narration, I couldn't listen to more than the first 2 or 3 chapters of the novel. What I did hear sounded like a fairly generic tale about an itinerant war veteran, struggling to find a place to live and encountering the usual problems - hostile townsfolk, random gunslingers, war widows, etc.

Scott Sower's characterizations were adequate as far as the sounds of the voices went. The problem with his narration was that he paused a few seconds between EVERY sentence. These pauses completely wrecked the story's continuity and frustrated me to the point where I put the book aside after listening to no more than 3 chapters.

If you could play editor, what scene or scenes would you have cut from North to the Salt Fork?

I would not have cut any scenes. After listening to the first audio "draft", I would have instructed Scott Sowers to eliminate the pauses. If he could not do so, I would have assigned a different narrator to the project.