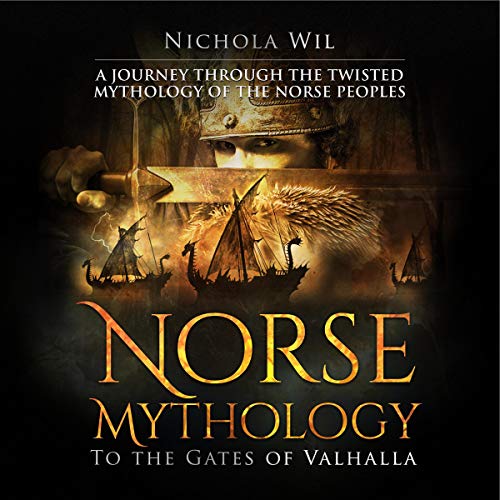 By: Nichola Wil
Narrated by: Andrew McDermott
Try for $0.00

Are you dying to find out more about the lives of Vikings? From Ragnarok to the Gods of Norse Mythology, this book tells you the stories of a fascinating, ancient people.

Few civilizations lead such brutish, jealous, and war-like lives, as the Vikings. A culture based on conquering and strength, the Vikings had deep-seated beliefs in gods who were just as problematic as their people. These beliefs created a colorful and captivating society of born warriors.

In Norse Mythology: To The Gates of Valhalla, I deconstruct a thriving nation of people and the beliefs, rituals, and myths that helped them become a formidable force in Europe after 800AD. Explore the open waters with me, and I’ll take you on a journey through the best Viking tales!

In this book you’ll read about:

These are stories of adventure, battle, and furious glory! Delve into the dark depths of Norse mythology and be swept away by the past, and its many lessons.

If you love mythology and you enjoy history - this book will give you a much-needed break during your day. Dip into the lives of the great Vikings and their gods of old.

This is the book that teaches you about Norse history and myths!
Buy the book and start your quest!

What listeners say about Norse Mythology

A small encyclopedia of Norse mythology. The beginning sections are a nice overview of Norse history and beliefs

Norse Mythology is a great Journey stories Audible guide. I think that's the better from another. Overall Excellent!

Excellent stories and Good Narrator. Twisted Mythology of the Norse Peoples. I want to prescribe this book for all. I also chose this book length. Valuable for me.

The stories are clear and concise. There is very little plodding, even when plodding is the activity in the story.

The book is properly designed. Great typeface, excellent page layout, nice weight to the paper. Unlike many current books your eyes don't trip on a minefield of typographical errors.book to re-read with great pleasure!

Really one of my favorites so far on this topic!

This book had a ton of extraordinary parts and subjects of Norse folklore that I was extremely inspired by. My preferred sections were: The Creation in Norse Mythology, The Major Gods and Goddesses, Ragnarok and particularly The Influence of Norse Mythology on Our Lives today.Mythology is a fascinating subject which gives an understanding into one gathering's journey for something more noteworthy!

The chapters on Norse Mythology are great and the narration is outstanding. The last few chapters about financial advise and self-help were in a word, weird and unnecessary.

I chose this storybook and also liked Twisted Mythology. In this book, you will get many learning help about Norse Mythology. PERFECT!

The presentation is clear and truly gives a pleasant foundation to the sonnets, and why they were deciphered the manner in which they are in the book. It additionally gives a pleasant comprehension about the history, just as the Vikings and their way of life which is a tremendous piece of the sonnets and their experience. This book places it into all the more effectively gotten language, while as yet remaining consistent with what it initially said. Very prescribe!

great book to get into greek mythology; very interesting to read and easy since it has various stories that differ in length

For someone new learning Norse Mythology,

For someone new learning Norse Mythology, this is perfect. I love that this is both very readable as a book but also knowledge comprehensive in content. I only wish there was more on Hel.

I got my dad this for Christmas because he is huge into Norse myths. And this is a gorgeous book. I actually told him I get this when he dies. (our family is just like this: morbid). He laughed and agreed.

Just getting started on this book of mythology, but am really enjoying it. I recommend this for anyone who enjoys reading the old stories of gods, goddesses, monsters and heroes. Nichola Wil does a great job of retelling these stories with an explanation of their history and relevance.


The book arrived early and in amazing condition. However, if you don’t want to pay a lot of money.


This is a beautiful book. The cover has a soft buttery feel to it.
I took one star away, because the cover on the back had weird greasy marks all over the bottom half.

I’ve always wanted to know more about Norse history and mythology. This is the best way to have it explained as Nichola Wil sets everything out in a clear and concise manner. Andrew McDermott does a great job with the narration to make the Audible Audiobook an enjoyable listen.