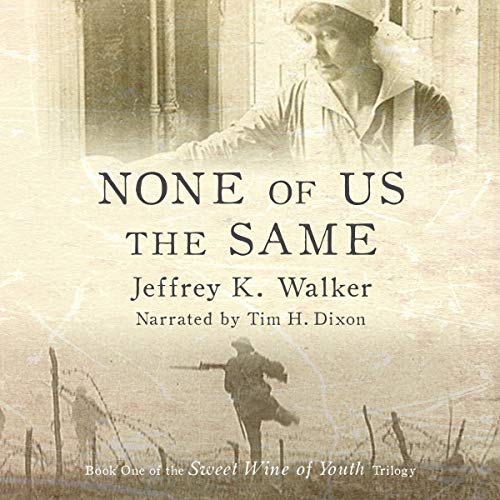 None of Us the Same

Fiery Deirdre Brannigan had opinions on everything. She certainly hated the very idea of war in 1914. Childhood pals Jack Oakley and Will Parsons thought it a grand adventure with their friends. But the crushing weight of her guilty conscience pushes Deirdre to leave Ireland and land directly in the fray. Meanwhile, the five friends from Newfoundland blithely enlist. After all, the war couldn't possibly last very long....

They learn quickly how wrong they are and each is torn apart by the carnage in France.

What began with enthusiastic dreams of parades and dances with handsome young soldiers turned into long days and nights in the hospital wards desperately trying to save lives. And for the good and decent young men in fine new uniforms aching to prove themselves worthy on the field of battle, the horrors of war quickly descended.

But it is also the war which brings them together. Deirdre's path crosses with Jack and Will when they're brought to her field hospital the first day of the slaughter on the Somme. Their lives part, their journeys forward fraught with physical and emotional scars tossing them through unexpected and often painful twists and turns. But somehow, a sliver of hope, love and redemption emerges. And their paths cross again in St. John's.

When the guns finally fall silent, can Deirdre overcome her secret demons through a new life with battered Jack? Can shell-shocked Will confront his despotic father's expectations to become the man his young family deserves?

What listeners say about None of Us the Same

I was provided with the opportunity to listen to this book for free by the author and have voluntarily chosen to leave this review. None of Us the Same, though called Book One in a trilogy, is nonetheless an ambitious novel that covers many years and serves well as a stand-alone in that there is a sense of completion at the end of the story. But ambitious remains the key word for my impressions: the author tried to do too much. So many characters were introduced early in the novel, with so little attention paid to making them sympathetic, that I was sorely tempted to abandon it completely early on. I persisted, and finally by about chapter 11 or 12, I felt enough familiarity with the different personalities that I resolved to persevere. While I enjoyed the opportunity to learn more about both Canadian and Irish participation in World War I, I never did come to care enough about the characters to feel an attachment to the story. On the contrary, I felt active dislike at times for the main female character, Deidre. Unfortunately, the narrator's abominable attempts at female intonation and inflections came close to ruining the story completely and probably increased my dislike for Deidre. I saw little sweet wine in the youths described before the start of the war and not all that much (understandably) afterwards, and I feel little inclination to move on to Book Two.

First of all, I would say that this is not a beach read, or something to pass the time in an airport. It is work of literature worthy of your total attention. As a frequent listener of books on Audible, I found that I had to start over and pay attention to the characters. I found it useful to write down the characters appearing in the first two chapters to keep me on track as the book developed. As I recall, there were 16 characters identified in the first two chapters, and writing them down helped me to keep them straight as they were developed during the course of the novel.
This is a saga of several families starting before WWI and continuing through the 1920’s. The characters were wonderfully developed and their stories were compelling.
The descriptions of life in the trenches and the horrors of WWI were told in a way that you could feel the anguish of the soldiers and those they left behind. It also factored in the cultural values of the time, and their misunderstanding of what we now call PTSD and Traumatic Brain Injury.
The book could have ended with the conclusion of the war, but it went on to describe how the war affected those who survived.
A great story, well told. The narration was excellent! I highly recommend this book an a poignant look at a fascinating time in history.
I was provided this book by the author with the understanding that I would provide an unbiased review.

Learned a lot about World War I and really enjoyed the characters and story. Looking forward to the rest of the series being available on audible!

A story about the effects of war on people's lives

I received this audio book free from the author in exchange for a review. I enjoyed listening to this audio book though many of the topics are hard to hear. This book is very realistic about the damage war causes to the people in the midst of it. I especially appreciated the way the author dealt with the topics of addiction and PTSD.