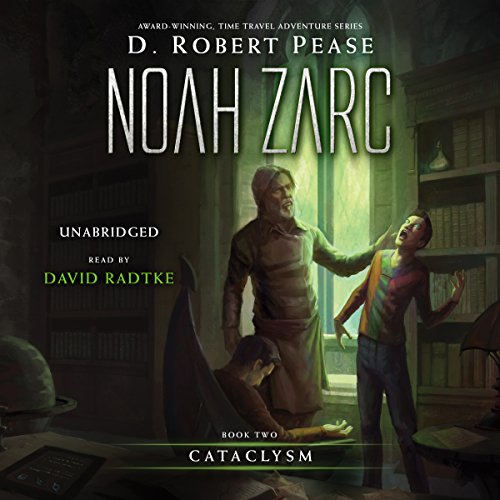 Is Noah Zarc responsible for the destruction of Earth...1,000 years before his birth?

Noah Zarc rockets to Venus on a quest to discover the truth about his past. He refuses to believe his father is really the monster everyone says he is. Could there be valid reasons for everything his father's done, including abandoning Noah at birth?

Together with his two friends, a plucky girl from the Ice Age, and a street-wise kid from back alleys of Mars, Noah searches for answers to secrets everyone refuses to talk about - secrets that have remained hidden for over 1,000 years. In the process he becomes embroiled in a mystery that could have devastating consequences.

Could it be possible that Noah inadvertently caused the greatest cataclysm in the history of the solar system? Will the name, Noah Zarc, be forever linked to the most devastating crime in humanity's existence, all because he was in the wrong place at the wrong time? Race with Noah as he tries to stop the destruction of Earth, even if the enemy he needs to stop...is himself.

“This is another great mind-bender. The wild time jump details are fabulously thought out and cause some unexpected results.” (Michelle Isenhoff - Children's Author)
“Pease's strength as a storyteller lies in his ability to connect multiple time periods imaginatively, as well as Noah's excited, fast-paced narration.” ( Publishers Weekly)

The series just got even better

Yes, because the story just got a lot more interesting! The first book was kind of the warm up. You know, introducing the characters, the setting, the relationships between everyone, as well as having a good story for the reader (listener).

But this part 2 is really where things get good!

The messing around with time travel. Not too confusing, but just enough to make you think. The clever way the characters return to a certain planet is very well done, not to mention how they keep hopping around to different countries in the past to try to accomplish their goals.

Have you listened to any of David Radtke’s other performances before? How does this one compare?

I listened to book 1, and the narrator continues to do an excellent job. Still hard to imagine it's only one guy doing all the voices.

Even better than the first!

What the author did with time travel was very creative. I'll never look at time travel the same way again. It's not confusing, just very very well done. And how he was able to take a book written in the first person and give you views that weren't from the main character's perspective was very crafty.

The author laid very nice ground work in book one, but this book is where the series really shines. A great story with great characters.

Two thumbs up and five stars all around.

It's fun how the author plays around with time travel and yet still stays within the "time travel rules" he created in the first book.

I love how there is a lot of international travel, too. Different countries and different people all with unique accents that the narrator does a great job of performing.

The way the story flows keeps you guessing who the real bad guy is right up to the very end. No early clues that leave a story flat. Plenty of back and forth and twists and turns to keep you on your toes.