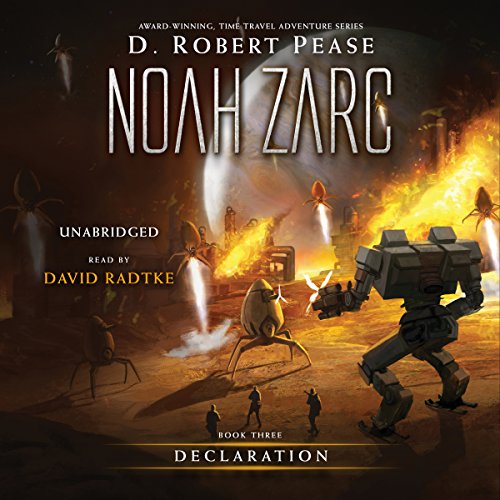 Can Noah Zarc keep peace across the solar system...even if it means starting a war?

As battles rage across the solar system, Noah Zarc must work to unite a rag-tag bunch of miners, farmers, and scientists who would rather just live in peace than fight a war which could set humanity back to the dark ages...if not destroy them altogether.

With only a time-traveling ship full of animals and a General from the history books (who is more comfortable riding a horse than in a spaceship) the Zarc family has to stand against the full might of a highly trained army of attack-drones, and a fleet of battleships armed with enough firepower to take out an entire planet.

Will the truth about what really happened 1,000 years in the past be enough to stop total war? Or will Noah and his friends need to find another way to bring down a ruthless dictator who will do anything to keep himself in power...even if it means destroying the very people he rules?

What listeners say about Noah Zarc

I have thoroughly enjoyed the complete series. Each book has it's own uniqueness and yet flows nicely together as a whole. This conclusion to the series ties everything up nicely. But as most books do, there is room for future books to be written.

I don't want to give anything away, but the narrator's performance at the end made me well up with tears. I've never had that happen to me before with an audiobook. And there are certain scenes that would have been confusing had the narrator not taken great care in making the quick point of view switches so smooth and clear.