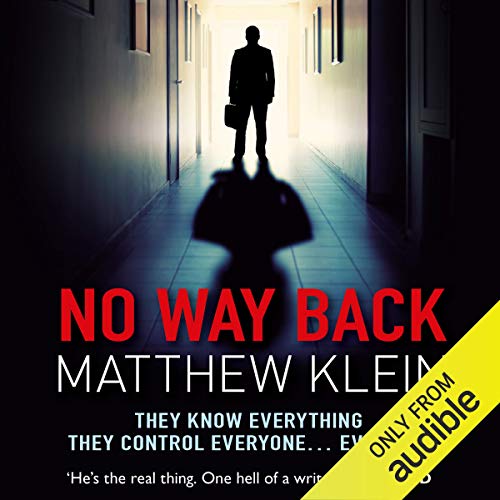 By: Matthew Klein
Narrated by: John Chancer
Try for $0.00

Jimmy thinks he knows about loss, about fear, about paranoia. He should think again. Every time Jimmy Thane has been faced with a crossroad, he's taken the wrong path.

But after years of drinking and womanising, he has been given one last chance to save both his career and his marriage - he has seven weeks to transform a failing company.

From the moment he enters the building there's something wrong - the place is too quiet, too empty. When the police come calling about the disappearance of the former CEO, Jimmy starts to wonder what he's got himself into.

Then he discovers surveillance equipment in his neighbour's house, looking straight into his front room. And his wife isn't just tired, she's terrified and trying to hide it. Nothing is as it seems.

Jimmy's not living his dream - he's been plunged into the worst kind of nightmare. And when the truth comes out, it's more terrifying than he could ever imagine....

What listeners say about No Way Back

No Way Back - Not the usual who done it

I thought this had a really good plot. It's written in a way that the reader (me) thought I was able to predict the outcome with ease. It Appeared to be very much like other books in this genre, different names, different towns, same story. I was wrong.

John Chancer did a great job. Different voices for different characters. Easily distinguishable from one to another. I would certainly listen to him narrating again.

I highly recommend this book. I found it believable, not too "out there" as some others have suggested. I have read/listened to other books that have much more unbelievable plots and get rave reviews. I did not feel like I had to suspend my common sense. The books end has such a great twist. I won't ruin this for anyone but when listening to this book and pulling for the protagonist keep in mind the antagonist is closer then you realize!

Would you consider the audio edition of No Way Back to be better than the print version?

I don't know about better, but the narrator was good. A couple of accents were a little off, but he has great division between characters. It's more like hearing 2-3 people talking than one person telling a story.

What other book might you compare No Way Back to and why?

I can't really think of any one book to compare the story line to, which is what makes it a great book. It's a really original plot line. I could probably give you some comparisons for the first 95% of it but they would be different for the last 5% and that would give it away. It's really a crying game type twist at the end that just turns everything upside down. In fact, the book completely switches genera's on you in the last ten pages or so.

Which character – as performed by John Chancer – was your favorite?

The sponsor/detective; I love the hard nosed guy who's seen it all and doesn't take crap.

I certainly would have if it weren't for work, kids and life in general.

I'd also recommend "Switchback". It was really good as well. I'm reading "Con Ed" next; after a little Craig Johnson detour.